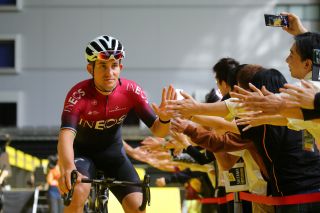 After a disappointing first season with Team Sky – now Team Ineos – in 2016, Michal Kwiatkowski came roaring back in 2017 and 2018, with a string of high-profile victories and and a key support role in Chris Froome's and Geraint Thomas' Tour de France victories.

However, 2019 saw things veer drastically from the script. After an encouraging start to the campaign, with podium finishes at Milan-San Remo and Paris-Nice, Kwiatkowski fell well short of his best. He was anonymous at the Tour, and then made the decision to skip the Tour de Pologne – his home race – and the World Championships, effectively ending his season.

Cyclingnews caught up with Kwiatkowski in Japan at the recent Saitama Crtierium, where the 29-year-old was able to reconnoitre the course for the Olympic Games, which will form the centrepiece of a 2020 season in which he's confident he can get back to his best.

Cyclingnews: How do you look back on your 2019 season?

Michal Kwiatkowski: It didn’t go as planned. In the first part, I performed well but never got the result I wanted. That’s a pity, because for sure I had the legs to win some races. That’s sport, I accepted that, and tried to prepare for the second half of the season with the Tour and Worlds but, to be honest, I sensed in spring already that I felt a bit of fatigue from the previous season.

I was trying to build something for 2019, building form based on a full racing programme with Dauphiné, Nationals, Tour, Poland, Vuelta, Worlds. It was pretty heavy but we had a plan to make a big step forward based on racing kilometres and the form I showed in 2018.

To be honest, I felt great in the winter but I never really recovered from last season, and the best proof of my, let’s say, theory, was the way I performed in the second half of the Tour. I was 100 per cent ready, I did absolutely everything, I didn’t make any mistakes in my preparation, but I finished the Tour on my knees. I wasn’t myself. My body was just yelling for recovery. That’s why I had to swap my whole programme for the end of the season. I was really hoping for Worlds but decided to skip that and Poland. For many weeks after the Tour I was feeling fatigue. I just tried to survive until the end of the season.

CN: Tell us more about the Tour, because we’d become so used to seeing you up there in the mountains.

MK: I felt pretty good in the mountains in the Dauphiné, especially the last three days, and I thought I was on a good way. I actually started the Tour feeling good – until the first rest day I was flying on my bike – but from stage 11 I wasn’t myself. It wasn’t just the mountains; I was struggling wherever I had to ride hard. It was a tough experience. I was trying to help as much as possible but I was not happy with my performance. That’s how it is. It was a tough experience but we survived it.

CN: What was the toughest moment?

MK: The whole last week – when you’re there and you’re not able to even help.... When Egan took the yellow jersey [stage 19], I was already struggling from start of stage. Ok, you can have some ups and downs but being completely not on your level is something different, so that last week was the toughest experience

CN: Did you know immediately it was due to accumulated fatigue?

MK: I don’t see any other reason. I’m 100 per cent professional, I know what I did before the Tour as preparation, I wasn’t sick or anything, so it must be that chronic fatigue that had built up over many months, I’d have to say.

CN: It must have felt serious to skip Poland and Worlds…

MK: At the end of the day, I have a group of people – my coach and the team – who always support me. They know how hard I work and what I want to achieve. It doesn’t matter if I perform or not – they always support me. It was great to have them behind me at the moment I was struggling. It was tough but it was the right thing, because if I was at Worlds it would have been a disaster, I guess. It was great to push the re-set button and think about next season.

CN: What was the plan after the Tour, because you carried on racing?

MK: I was just trying to cut the volume and intensity and recover as much as possible. We are in professional sport so it’s not like you can lie in bed and wait for next season; you still have to so something and help the guys who can win races. I wanted to be there and keep busy – I didn’t want to lie on a beach – but it’s not easy because when you’re there in Germany, for example, riding in the gruppetto, it’s not fun. But if you can accept you know the reason, and understand it’s temporary, it’s ok.

Kwiatkowski: I've been waiting for Liege-Bastogne-Liege all winter

CN: I was struck by a quote when you announced your programme change: "Hopefully soon I will be able to find a joy from riding my bike." Did you lose your love for the sport?

I definitely lost joy. It wasn’t fun to ride the last week of the Tour, when you’re struggling like that. It wasn’t me. I’m here to win races and to feel great on the bike. I don’t find myself in a good place when I’m riding in the gruppetto. Even going out for a ride, you should have this feeling of just wanting to ride your bike, no matter the training schedule. I’ve got that feeling back now. Even today with Froome, we went out at 6am for a ride – not because it was on our training schedule, but because we wanted to.

CN: So you feel refreshed now?

MK: So far I feel great. I needed that break. I feel already fresh and I'm and already thinking about next season, which will probably start at Tour Down Under. I was catching up on that freshness since the Tour. Right now, I don't feel I need a proper off-season break, because I enjoy riding a couple of hours a day – it’s what I need right now. I'm looking forward to next season already.

MK: Part of the reason I decided to come to Saitama, let’s say at the last moment, is because of the opportunity to do a recon of the Olympics. That’s a big goal for next year. I wanted to be ready for that after the Tour, which hopefully I’ll be riding. If I come out of the Tour like I did in 2017 and 2018, for sure I can perform at the Olympics. My race programme won’t change too much. I’ll start a little earlier because, in theory, I finished my season at the Tour. So I’ll start earlier, with Tour Down Under, but the programme will be similar to previous years, with probably Algarve, Strade Bianche, Tirreno, Milan-San Remo then the Ardennes Classics.

CN: What did you make of the Olympics course?

MK: It was crazy weather conditions when we did it. We did Mount Fuji in the car, then rode the last 60km. In my opinion, the Mikuni Pass climb, 30km from the finish, is the decisive moment of the race. It’s 7km with an average gradient of 10 per cent. After 190km, that’s going to be very difficult. We’re not going to see many guys at the finish. The roads are great, compared to Rio when we had a dangerous descent from the top of the climb. Here it’s not really technical, so the guy with the best legs is going to win.

CN: What do the Olympics mean to you?

MK: Racing for the national team is always a great opportunity. That’s why I was almost crying that I was not part of the team in Yorkshire. I know how great it was to race with Rafal [Majka] when he won bronze in Rio. I’d love to be in my best shape and fighting for Poland in Toyko.

CN: The Worlds course in Switzerland is also hilly and looks well suited to you...

MK: It’s far away – too far. I need to do the spring in the first place, then the Olympics is the second goal, so I’m not looking that far ahead. It will be a long season, and for sure I won’t do two Grand Tours. I’m pretty sure, looking at my 2017 and 2018, that if I have a good balance, and don’t fuck up my preparation for the season, I’ll be able to perform throughout.