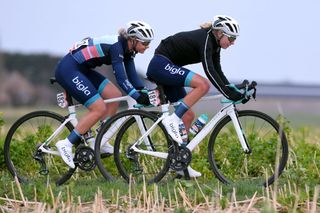 Katusha Sports announced Tuesday that it has launched a fundraising effort to help continue its support for Bigla-Katusha after it was forced to temporarily suspend its financial contribution to the team due the economic impacts it has felt from the COVID-19 crisis. Profits gained from the sales of the Bigla-Katusha women's team collection kit will be donated to helping the riders race later this season.

"Due to the unforeseeable circumstances, Katusha Sports has suffered greatly for the last months, causing a strong financial hardship for the young company. Because of this we are temporarily unable to fulfill our financial contribution to Team Bigla-Katusha," a press statement confirmed.

"Regardless, we aim to support the riders as much as we can. We care about the welfare of the athletes, and their longer term career trajectories, and hope they will be able to race as soon as possible and as much as possible.

"As an immediate measure, Katusha Sports has taken the decision that the profits of the Bigla-Katusha collection kit sales via Katusha-Sports.com will be donated to helping the riders and enabling them to race this season."

Bigla-Katusha announced last week that their future was in jeopardy after receiving notice that both title sponsors had withdrawn funding amid the COVID-19 pandemic crisis. Bigla, which has sponsored the team since 2005, notified the team that it would withdraw 100 per cent of its funding. The team also stated that Katusha Sports, which came onboard as a co-sponsor this year, had declined to pay the team sponsorship funds for the past month.

Katusha Sports announced last October that it would co-title sponsor the Bigla team in 2020, not only as the official clothing partner but as a financial backer. Cyclingnews understands that it funded just under a third of the team's annual budget this year.

The clothing brand confirmed that it has faced financial decline during the COVID-19 pandemic largely because it hasn't produced product for the past two months as factories are closed. In addition to its e-commerce centres being closed, the company is not bringing in a profit and stock sales have dropped, which has affected its ability to fulfill financial sponsorship agreements with the women's cycling team.

The riders from the Bigla-Katusha team wrote an open letter to their sponsors requesting their support to help ensure the squad’s survival.

Katusha Sports has stated that it hopes the financial strain is temporary. Cyclingnews understands that if investments resume post-COVID-19 pandemic, the plan would be to carry out its financial support of the team.

In the meantime, Katusha Sports has launched a fundraising effort by contributing profit from sales of women's replica kit to assist the efforts of the Bigla-Katusha riders.

Additionally, the company stated that any other items purchased with the code B4TBK will contribute an additional 10 per cent from such items’ price to the fund.