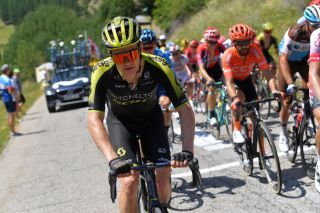 Chris Juul-Jensen has extended his contract with Mitchelton-Scott until the end of 2021, taking him into his fifth season next year with the Australia WorldTour outfit.

Mitchelton-Scott: Our most successful Tour de France ever

The affable Dane – who was born in Kilmacanogue in County Wicklow, Ireland – said that being part of a team that has evolved into one chasing victories at both the Grand Tours and the Classics has been exciting.

"During the four-years that I've been here, Mitchelton-Scott has developed into a general classification team with a massive string of big GC results, but also one-day results. There's so much to ride for but also so many riders to ride for, which makes my job so enjoyable," said the 30-year-old in a team press release.

"The last four years have been as good as I expected in terms of how I imagined the team before I joined," Juul-Jensen continued. "They've lived up to all expectations, and it's a team that I really like to be on, both on the personal side of things and also the sporting side of things.

"I feel like I've developed into the type of rider I saw myself as – as a trusted domestique – but the team still gives the freedom to pursue your own chances when they're there."

Juul-Jensen joined Mitchelton-Scott from the now defunct Tinkoff-Saxo squad, taking the overall classification at the Tour of Denmark and the national time trial title in his last season with the team in 2015. In 2018, Juul-Jensen was thrilled to win a stage at the Tour de Suisse.

"Those were very important victories in my career," he said at the time in relation to his national title and the Tour of Denmark win, "but I've never crossed the finish line first before."

However, Juul-Jensen is happy to spend most of his time working for his team's leaders, both at the Grand Tours and the one-day Classics.

"Chris is someone who has really grown into this organisation and into a leader of this team since he joined us in 2016," said head sports director Matt White. "He is very reliable, very versatile and, as we've seen in the last couple of years, a guy we can take anywhere on the calendar.

"He has become an integral part of our engine room in helping us try to achieve goals, especially in stage races," he said.

"It has to be one of the few teams that still has most of the same staff as when they started eight years ago, and that makes a massive difference and for a great atmosphere," added Juul-Jensen.

"I couldn't really imagine myself happier anywhere else. I just want to get better at what I'm doing and have more responsibility as the domestique that I am within the team," he said.