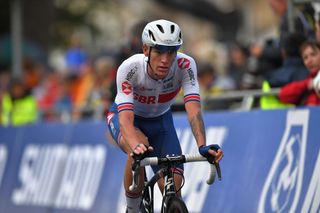 British rider Jake Stewart is set to turn pro with Groupama-FDJ in 2021, with the team announcing his move up from their Continental development squad after a series of impressive rides this season.

A newly-introduced UCI rule has enabled Stewart to race with the WorldTour squad at ProSeries races this season, the first rider from the development squad to do so. He made his debut at the Volta ao Algarve in February, also taking part in Le Samyn, the Mont Ventoux Dénivelé Challenge and the Tour de l'Ain as part of the senior squad.

"I'm really happy because it's a huge opportunity to sign with the WorldTour team," said Stewart. "I am still a young rider and I'll still be in a learning phase in my next two years. I hope to continue to move through the stages and progress, but I also hope to win a few races. I have proven that I can do that.

"I think this team is the best choice for me. It has already given me a lot of opportunities and I hope to have many more in the future to become the best rider I can be."

In 2019, Stewart showed an aptitude for the Classics, racing to third at the U23 Tour of Flanders and eighth at the U23 Paris-Roubaix. He also finished third at U23 Eschborn-Frankfurt and fifth at the Le Triptyque des Monts et Châteaux.

Earlier this year Stewart told Cyclingnews that his aspirations lay in the Classics, with a cobbled Monument among his career goals. The 20-year-old also hailed the Dave Rayner Fund, which helped him progress after leaving the British Cycling setup.

Groupama-FDJ directeur sportif Yvon Madiot welcomed Stewart to the team, praising the links the team has built with the development squad. Kevin Geniets, Simon Guglielmi and Alexys Brunel have all made the same move in recent years, while Cristian Scaroni and Kevin Inkelaar have turned pro elsewhere.

"The recruitment of Jake Stewart into the WorldTour ranks is great news," he said. "To begin with, he is another great example of the success of the bridge we are building between our Conti team and our WorldTour team.

"He has a lot to bring to the team. He has undeniable sprinter-puncheur qualities, which will be good for the team. He's a hyper-combative rider that we need!"