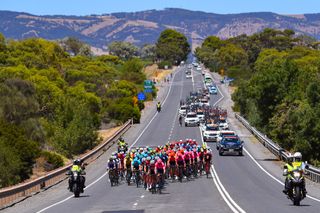 The Italian riders' association ACCPI has demanded better road safety after a number of riders were hit by cars in recent weeks.

A special feature in Wednesday's La Gazzetta dello Sport revealed how cycling deaths in Italy have fallen from 254 in 2017 to 209 in 2018, but confirmed that 17,000 people were injured in that period, with a social cost of €2 billion.

"Riding on the roads is like going to war but were not going to put up with this massacre," Italian national coach Davide Cassani said. In recent weeks Domenico Pozzovivo, Letizia Paternoster, Vittoria Bussi and junior rider Andrea Ostolani have all been hit by cars, while Alessandro De Marchi vented his anger on social media after yet another close pass.

Dutch rider Edo Maas sustained serious injuries after crashing into a car that had driven onto the course of the Under-23 version of Il Lombardia and Samuele Manfredi is still in rehabilitation after being hit by a car in training last December.

Letizia Paternoster hit by car while training in Italy

Gesbert struck by car while training

The ACCPI has been pushing for the introduction of a law to introduce a 1.5m minimum passing distance. However it has become bogged down in parliament. Marco Cavorso is the ACCPI's safety delegate. He lost his son Tommaso in a road accident and he has written to Italian president Sergio Mattarella to demand the law is passed.

"Two years ago I spoke to you about the modern-day war that is killing our children, the war in act out on the Italian roads and roads around the world. It's a terrible war, that most of all kills people who can’t defend themselves," Cavorso wrote. "I call on you to use your powers to accelerate the approval of the law."

Cavorso has gathered thousands of signatures of people pushing for the law to improved and approved. Cavorso wants a driver's licence to be suspended for a first offence when an accident is caused by a driver being distracted by using a mobile phone.

Cassani called on cyclists to defend themselves by following a code of conduct. He suggested using lights during daytime rides, always wearing a helmet, respecting the highway code and never using headphones. He called on better road safety education in schools.

He also called on riders to say calm despite the dangers out on the roads.

"When a car blows their horn, I raise my arm to show I've heard them and so that they know that I'll let them pass when I can," Cassani said.

"We need to have a dialogue with car drivers and getting angry won’t resolve anything. Some accidents happen because they see us riding in groups and hate us. We need time to build a dialogue and we need to learn to tolerate each other.  It'll take time but they'll eventually learn that were out on the road too."