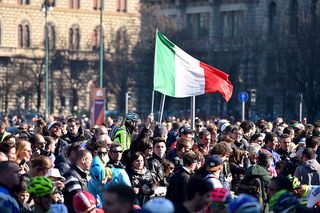 Italian professional and Olympic level riders will have to stay in lockdown and so will not be allowed to train on the open roads until at least May 3. However, the Italian racing season could be saved by holding the Giro d'Italia in October, according to Renato di Rocco, the president of the Italian Cycling Federation .

The Italian government imposed a national lockdown on March 9, and the number of COVID-19 coronavirus cases and deaths has reached a plateau and is expected to fall off in the coming days. However, more than 18,000 people have died and medical experts have warned the country still has a long struggle ahead to reduce the dangers of the virus.

Italian Prime minister Giuseppe Conte has announced that a few non-essential shops and industries will be allowed to reopen on April 14, and so the Italian professional rider association was hoping to obtain permission for their members to train outdoors as it considered a vital part of their employment.

However, Italian Sports Minister Vincenzo Spadafora told di Rocco that any return to training on the open roads will not be allowed until at least May 3.

Professional riders were initially allowed to train outdoors at the start of the lockdown, but many received abuse and threats from members of the public and were considered as a bad example for the wider public, who were ordered to stay at home.

"We analyzed the details of a possible return outdoors, but the problem is there are still too many clusters of cases in the north of the country, where many of the riders and teams are based. We've all worked hard to lower the number of COVID-19 cases in recent weeks and it’s still important to stay at home," Di Rocco told the Il Messaggero newspaper.

"Professional and Olympic riders will probably be allowed to train outdoors from May 3. We can’t use up military or police forces to protect them in training."

"There's a desire to race again, but it has to be done while respecting the protocols and decrees that protect public heath," di Rocco told Tuttobiciweb.

"The Giro d'Italia in October is an objective because in such a difficult moment, the Giro could be a great way to help get everyone going again and to also promote Italy."