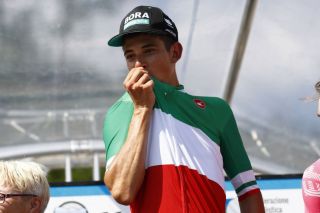 The 2020 Italian Championships have been postponed due to the coronavirus pandemic. The championships were due to take place in Vicenza from June 14-21, but Italian federation president Renato Di Rocco told Il Corriere dello Sport that the event has now been postponed as competition is unlikely to resume before August.

"If things go well, we could get back to racing in August, maybe at the end of July, but I don’t think before that," Di Rocco said.

"Priority will be given to the Grand Tours and the Monuments, but we’ll look to save as many races as possible. In the meantime, we have also postponed the Italian Championships, which were scheduled for June."

Tour de France focused on postponement not cancellation, according to confidential email

The 2020 Italian Championships course was designed by Filippo Pozzato, a native of Sandrigo near Vicenza. The elite men’s road race was due to start in Bassano del Grappa and finish in Cittadella after taking in a circuit on the climb of Rosina near Marostica. It is unclear when the postponed Italian Championships would take place on a revised calendar.

The UCI has suspended all racing until at least June 1, but several high-profile races in June have already been postponed or cancelled, including the Critérium du Dauphiné and Tour de Suisse. Most national championships in Europe are, like the postponed Italian Championships, scheduled for the week before the Tour de France in late June.

The Tour remains on the calendar for June 27-July 19 for the time being, even if it seems increasingly unlikely that the event can take place on its scheduled date.

Il Corriere dello Sport asked Di Rocco to assess the prospect of a revised calendar that would see the Tour de France taking place in late August and September, the Giro d’Italia in October and the Vuelta a España in November.

"It’s possible. The organisers are seeking a definitive agreement," Di Rocco said. "The Giro could be brought forward by a week if the Worlds [scheduled for September 20-27 – ed.] had to be moved."

The UCI recently reached an agreement with race organisers and teams to extend the season to November, though Di Rocco noted that the year could only be stretched "to mid-November, not beyond".