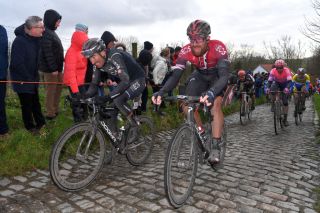 Team Ineos’ cobbled Classics campaign got off to a sorry start on Saturday at Omloop Het Nieuwsblad, where only three of their riders finished and only one did so within five minutes of the winner.

In the end it was Ben Swift, who has limited experience in Flanders, who led the line and ended up as the team’s best finisher in 38th. Stannard and Moscon placed 49th and 54th, nearly 7:30 down on winner Jasper Stuyven.

It was a disappointing turn of events given the way Ineos had started the race, piling no fewer than five riders into a leading echelon as the bunch split in the stiff crosswinds. However, soon after the race had come back together, they found themselves on the back foot as a number of key riders forced a dangerous echelon over the Leberg with just under 100km to go.

“We started off pretty good, and got five guys in that echelon after 60km, and when that got caught around the feed zone, we eased off a little bit and we got a bit on the back foot after Haghoeck and Leberg. We paid the price,” director Gabriel Rasch told Cyclingnews in Ninove.

“The mood is ok, they’re obviously not happy with the result but I think we need to look at why we didn’t have more guys in the front and change it up. They relaxed a bit too much, then in the echelons after Leberg, we weren’t really there when that group went, so that’s the first reason and some of them didn’t have the legs today, simple as that.”

Stannard, Rowe, Moscon and Swift all produced efforts to try and close the gap but the chase group was not cohesive, although the race did stitch back together once more in the headwind with 78km to go. At that point, Stannard went on the attack, but soon after he was caught, what turned out to be the decisive seven-man selection went clear.

“Stannard had really good legs today, so that was a positive," Rasch said. "It’s a shame that the group went just after he tried. He had some problems with his bike and he had to change it after the Berendries [30km to go], and the race was finished for him.”

Other positives for Rasch included the way Swift rode in a rare taste of the cobbles, but Rowe, arguably Ineos’ strongest Classics rider over the past few years, clearly wasn’t himself.

“Luke didn’t have the best day today, so he said he’d try and work and do a job,” Rasch said.

In discussing his team’s shift from aggression to scrambled defence, Rasch noted that “things change quickly in cycling”. His comments could also apply to the weekend as a whole, with Sunday’s Kuurne-Brussel-Kuurne offering an immediate opportunity to right Saturday’s wrongs.

“Tomorrow is a different day,” he said. “You just have to take the positives and move on.”