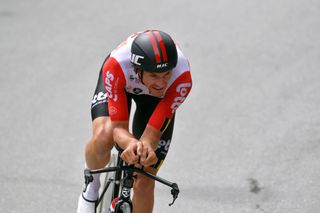 General manager John Lelangue announced the Belgian team's decision to go dry earlier this week, saying it was "part of the way of living together". He confirmed that riders and staff will still be able to celebrate victories, birthdays and "special events" with a glass of champagne.

"I'm the wrong person to ask," Hansen told Cyclingnews with a smile at the Tour Down Under on Thursday, "because I actually don't drink – I don't drink at all, so it really doesn't affect me directly.

"But, having said that, I totally understand it. When you look at the pure facts of it, if you're in a work uniform, you shouldn't really be drinking," he said. "I understand where John's coming from, and he's made the decision. And what he's saying is that if it's a celebration or a birthday, sure, you can have a drink, and do what you like when you're out of work and not in uniform, but I don't think any company in the world wants their employees to be drinking on the job or drinking in a work uniform."

Lotto Soudal ban alcohol for all riders and staff

Lelangue told Het Nieuwsblad earlier this week: "This measure applies in many companies. It is part of the way of living together. The majority of staff also thought this was a good idea. We remain a friendly team, but without alcohol. Drinking coffee together is also nice."

Hansen added that the code of conduct on his last team – HTC-Colombia – also included no alcohol.

"But there are rumours – and they're just rumours – that John's saying this so that we can try to win more," Hansen said with a laugh.

"I know that the team staff are a bit more affected by it than us as riders because they perhaps want to finish the day and then have a drink. And being here in Adelaide's a good example: it's full of bars, but you don't really want fans going past and seeing a whole team drinking," he said.

"They're probably doing nothing wrong – they're just having one beer – but what it looks like can be taken out of context, so this just annihilates all that, which I don't think is at all bad."