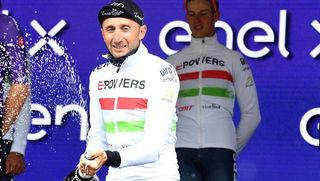 The Hungarian E-powers Factory team project has collapsed, leaving 50 riders and staff out of work for 2020 despite having agreed contracts.

Despite several claims that the registration of the team with the UCI had only been delayed, multiple reports in Italy and a rider involved in the project confirmed to Cyclingnews on Friday that the project was dead and would only exist as an amateur e-bike team in 2020.

An E-Powers team won the inaugural Giro E electric bike event that covered some of the stages of the 2019 Giro d'Italia, with Davide Rebellin and Andrea Tafi as guest riders on stages. That seemed to spark the idea of creating a professional team and even riding the 2020 Giro d'Italia that starts in the Hungarian capital Budapest.

Davide Rebellin: I had a lot of doors closed in my face

Former Italian professional Sandro Lerici has been signing riders and staff and working on logistical needs and the team structure, with Valerio Tebaldi as lead directeur sportif. However, the team struggled to confirm the financial backing to satisfy the UCI and so collapsed even before a final and fundamental appearance before the UCI Licence Commission.

The professional team was supposed to be part of a much larger cycling project in Hungary with a budget of 500 million Euro, aimed at promoting cycling, building bike paths and a velodrome.

Rebellin was supposed to be one of the leaders of the team, with La Gazzetta dello Sport reporting that Tafi would also have a place as he continued his dream to ride Paris-Roubaix two decades after his victory. A number of other riders, including several Italian neo-pros had also signed contracts but had become increasingly worried about their futures in recent weeks.

When the team was not included in the UCI's list of approved candidates for Professional Continental status in 2020, team manager Tamas Pacze played down reports the team would never happen, claiming he was still talking to major sponsors in Hungary and to the UCI regarding registration.

The team for 2020 was initially called E-powers Factory team because bikes were supplied by Hungarian e-bike brand E-Powers created by Istvan Vargas, who created hidden motors and magnetic wheels that were suspected to have been used in major professional races. The UCI was forced to introduce special tests and even a x-ray machine at major races to fight so-called mechanical doping.