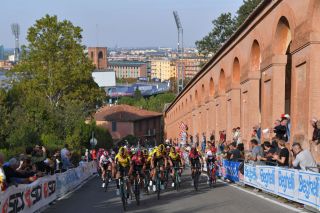 While Milan-San Remo, Strade Bianche and Il Lombardia are behind us, the Italian Classics season continues on Tuesday with the men's and women's editions of the Giro dell’Emilia – the last major Italian one-day race of August.

Cyclingnews will be bringing you full live coverage, reports, results and news during the race. Read on to find out how to watch the Giro dell'Emilia via live stream, no matter your location, with ExpressVPN.

Nibali, Carapaz and Fuglsang – all among the favourites for this year's Giro d'Italia – will be joined on the start line by Fabio Aru (UAE Team Emirates), 2017 winner Giovanni Visconti (Vini Zabu-KTM) and Ben King (NTT Pro Cycling).

The race finishes atop the San Luca climb in Bologna, although the women's course is a flat run to the hill, while the men will tackle a far hillier race, which takes in five ascents of San Luca.

Check below for all the details of how to watch all the action at the Giro dell'Emilia.

The Giro dell'Emilia will not be aired internationally, as only Rai Sport 2 in Italy will be showing the men's race, as well as a summary of the women's race.