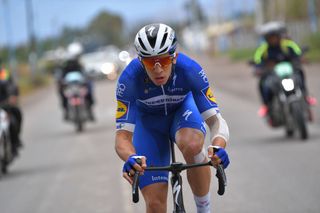 Alvaro Hodeg (Deceuninck-QuickStep) was transported to hospital with multiple fractures sustained in a crash in the final kilometre of Tour de l’Eurometropole on Saturday.

Hodeg will require operation on his shoulder, which will be performed in Belgium, on Sunday. He will also continue to be monitored for signs of concussion overnight, but is in stable and comfortable condition, according to a statement from Deceuninck-QuickStep.

Hodeg went into the Tour de l’Eurometropole as a favourite to win the race having been victorious at the Münsterland Giro earlier this week.

He was in a prime sprint position during the final kilometre of Tour de l’Eurometropole but clipped the barrier feet and crashed heavily through the last corner. He was taken to the hospital where doctors assessed his injuries.

Deceuninck-QuickStep announced on Sunday afternoon that Hodeg had undergone successful surgery on his left shoulder, and would remain in hospital under observation for another night.

We are pleased to announce that following yesterday's crash, @alvaro_hodeg has undergone surgery on his left shoulder, in Roeselare. He will remain in hospital overnight for observation.October 6, 2019