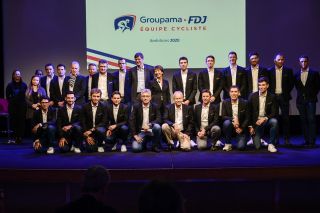 Groupama-FDJ presented their 2020 squad in Paris on Friday, with the team confirming that both title sponsors have extended their commitment until 2024.

The news means that national lottery operator FDJ, who have been a sponsor of the squad since its inception in 1997, will have committed to for 27 seasons. Insurance group Groupama, meanwhile, came on board as an equal partner in 2018.

The agreement sets the team apart as the only squad that has title sponsors confirmed so far into the future.

"This renewal is proof of great confidence," said Thibaut Pinot in a team press release. "Extending their adventure alongside us brings serenity. Preparing for major goals, such as the Tour de France, World Championships or Il Lombardia, requires a long-term approach.

"These are projects that take time and the announcement of this extension leads me to believe that these objectives are achievable."

Pinot will once again target the Tour de France in 2020. The Frenchman endured a brutal exit from the 2019 edition, where he lay fifth overall and looked among the strongest climbers in the race until leg muscle tears forced him to abandon his GC challenge on stage 19.

"My preparation is now focused on the Tour de France. I want to get the best possible result there, and I know I can do something great there – I was very close to it in 2019.

"I experienced a terrible disappointment, and the support of the sponsors during this difficult moment in my career was essential for my recovery. I would now like to return the favour by offering them results commensurate with their commitment."

The team's other main leader, sprinter Arnaud Démare, will target the Giro d'Italia and, for the first time, the Vuelta a España this season. The 28-year-old won stage 10 to Modena at the 2019 Giro, and has won two stages at the Tour de France.

The result in Italy was his biggest of the season, which returned five wins for the Frenchman. Having won 10 and nine races in the previous two years, he said that he aims to be more prolific this year.

"In 2020, I want to change course," he said. "I want to win more often and I want to hit hard. And it is this confidence shown by our two sponsors that will push me to exceed my limits. This renewal of their commitment is a powerful driving force for me.

"The fact that Groupama and FDJ decide to commit to four more years is news that I welcome with great joy. Their support in recent years has allowed us all to grow comfortably to be one of the best teams in the world today.

"But this extension also rhymes with new challenges. We now have the right to dream higher, to dream bigger. New objectives await us, and thanks to Groupama and FDJ, our ambitions will be high."