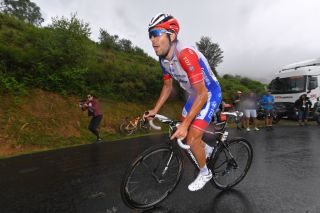 Thibaut Pinot will make his Paris-Nice debut in 2020 as he builds towards another tilt at the Tour de France. The Groupama-FDJ rider has been a regular at Tirreno-Adriatico in recent years, placing in the top five on four occasions, but he will stay on home roads in the opening weeks of the new season.

“It’s a special race,” Pinot told L’Est Republicain. “I’ve been a pro now for more than ten years and I’ve never ridden Paris-Nice. For a French rider on a French team, that’s quite rare. It will be good to go and see what happens.”

Pinot acknowledged that the Race to the Sun, which brings the peloton through often miserable conditions in central France en route to the Riviera, will make for a very different challenge to Tirreno-Adriatico, where he placed third overall in 2017.

The prospect of crosswinds might be part of the attraction for Pinot, who suffered a setback on the 2019 Tour after he was caught out when the peloton splintered into echelons on the road to Albi.

“The team will also be built for that. I’m taking a risk because I’m very familiar with the format of Tirreno, where I’ve always gone well,” Pinot said. “I’m breaking this early-season routine a bit. The echelons of Paris-Nice aren’t the same as in the month of July, but it’s still a race of echelons.”

In April, Pinot will return to Itzulia Basque Country, where he has not raced since placing fourth overall in 2016. Pinot will not race in May, when he will perform Tour de France route reconnaissance, and he is then expected to ride the Critérium du Dauphiné in June.

“But right now, I’m not thinking too much of next summer. It serves no purpose to worry too much about it now,” Pinot said. “I’ve already lived through everything, for better and for worse, on the Tour.”

In July, Pinot was in firm contention to become France’s first Tour winner since Bernard Hinault after winning atop the Tourmalet on stage 14 but his challenge ended dramatically when he was forced to abandon with a muscular injury in the opening kilometres of stage 19 to Tignes. He climbed off in tears.

Pinot has not raced since but told L’Est Republicain that he had recovered fully from the injury after taking four weeks off the bike following the Tour.

He was back in the saddle in September before taking a break in October and resuming training in early November. “We still don’t know the cause of it, that will remain a mystery and that’s the most frustrating thing,” he said.