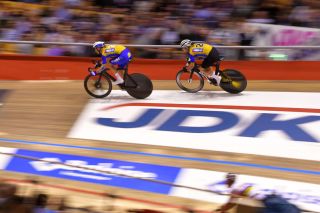 The Gent Six Day is set to come down to a dramatic finale in 'T Kuipke velodrome on Sunday evening, with four pairs on the same lap heading into the final day of racing.

On the fifth day on Saturday, Jasper De Buyst and Tosh Van der Sande took the overall lead from Kenny De Ketele and Robbe Ghys. However, De Ketele and Ghys are just one point behind and are on the same lap, as are the pairings of Mark Cavendish-Iljo Keisse and Roger Kluge-Theo Reinhardt.

De Buyst-Van der Sande have 238 points, with De Ketele-Ghys on 237, Cavendish-Keisse on 224, and Kluge-Reinhardt on 169. In theory, any of the four pairings could still claim victory on Sunday night.

De Ketele and Ghys started well on Saturday with victory in the Madison Elimination race but De Buyst and Van der Sande went on to win the main Madison event. Keisse and Kluge scored important points in the Derny races, before the final Madison race - in which Jan-Willem van Schip and Yoeri Havic came out on top - saw De Buyst and Van de Sande inch ahead of De Ketele and Ghys in the overall standings.

The women's omnium event was won convincingly by the world champion, Kirsten Wild. The Dutchwoman won the scratch race, tempo race, and elimination race to top the standings ahead of Jolien d'Hoore and Lotte Kopecky.

The tempo race was marred by another serious crash, with Simona Frapporti stretchered away to hospital. Also caught up in the crash, though without injury, was Shari Bossuyt, girlfriend of Gerben Thijssen, who was admitted to intensive care after a crash on the opening night.

There have been a number of crashes at the event so far, with Cavendish among the fallers, and the racing had to be halted on Friday when a spectator spilled a beer onto the track.

On Wednesday, para-cyclists Kris Bosmans and Diederick Schelfhout crashed over the upper railing into the stands, Bosman suffering a complex fracture to his femur, and Shelfhout a fractured vertebra. One spectator was injured in the incident.