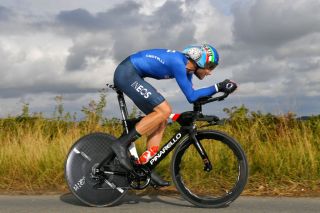 While Rohan Dennis and Remco Evenepoel were were talked about widely in the build-up to the elite men's World Championship time trial, the third rider on the podium – Italy's Filippo Ganna – had been some way down most people's list of favourites, including his own.

Ganna, riding his first Worlds in the elite category, claimed the bronze medal with a near-perfect ride in the 54km time trial, finishing 1:55 down on Australian defending champion Dennis and 47 down on Evenepoel (Belgium), but two seconds ahead of fourth-placed Patrick Bevin (New Zealand).

In doing so, the 23-year-old became only the second Italian to win a medal in the elite men's time trial in the history of the World Championships, following Andrea Chirato in 1994 and Adriano Malori in 2015.

"For me, it's strange, because yesterday someone asked me, 'What do you expect from the race?' I said I hoped to be in the first 10 positions, but in the top three, no. I didn't dream of that," Ganna told Cyclingnews at the finish in Harrogate.

"It's nice to win a medal at my first World Championships as an elite – for me, that's very important. Obviously, there was Rohan Dennis and Remco Evenepoel in front, but their palmares speak for themselves, so I'm really happy for the moment."

Fourth at both the intermediate checkpoints, and third at the finish, Ganna rode a well-judged, evenly-paced race on an undulating Yorkshire course that stretched him to the limit.

"It was a nice race, if very long. In the middle there was a lot for the strong riders, and I think I needed to be a few kilos lighter, because every climb wasn't easy," he said. "My legs were on fire, but in the end I arrived with glory."

Ganna was something of a surprise medallist, but he's far from a surprise package. Already a three-time world champion on the track – with the fastest individual pursuit time ever recorded at sea level – and a winner of the under-23 Paris-Roubaix, he is one of the rising stars of world cycling.

Having already enjoyed plenty of top-level international success on the track, Yorkshire confirmed Ganna's arrival as a road rider. He turned pro with UAE Team Emirates in 2017 and joined Team Ineos at the start of this year, combining the road with major track events all along. Since joining the British team, he's come on in leaps and bounds, winning his first three pro races: time trials at the BinckBank Tour and the Tour de la Provence, along with the Italian national title.

The Worlds, however, is a different beast. The BinckBank and Provence time trials were barely 8km long – only double the pursuit distance – while the Italian championship was some 20km shorter than the 54km Yorkshire course.

"It's so different. If you think of what I do on the track, this is, like, one hour more," Ganna said.

"With the team, we've worked on this speciality. We've studied my position, and when the better moments are for recovery in a race – for example, on the downhills. We've looked at every unique part of the bike. We've studied a lot, and this is where we have arrived."

Ganna, however, is not resting on his laurels, and insists this is just the start for him on the road.

"I have a lot of work to do again now. Dennis finished nearly two minutes ahead of me," he said. "I have a lot to do, but for the moment I'm really happy. I'm young, and I have a lot of time in front of me. I hope to continue to develop. For the moment, I hope to recover a bit and, after that, we'll see what next year and the future holds.

"I hope to keep going in the right direction," said Ganna. "It's a long road, but time is on my side."