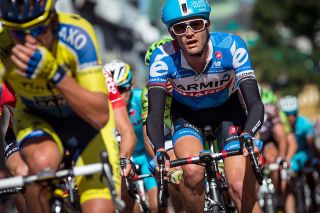 Phil Gaimon has revealed that he has been left with nearly $250,000 in medical bills after receiving treatment for injuries sustained in a horrific crash at the Valley Preferred Cycling Center velodrome in Pennsylvania last year. The American plans to hire a lawyer to help him through the process of dealing with his health insurance company, according to a report in Cycling Weekly.

"Obviously I won't pay any of that," Gaimon told Cycling Weekly. "California has a process where you can force your health insurance to pay, which has been basically one afternoon every week where I organise my bills and make phone calls and scan documents for them. I'm hiring a lawyer now to help."

Gaimon retired from a nine-year professional road racing career in 2016. He returned to track racing last year with a goal of making the national team selection for the Tokyo Olympic Games.

Phil Gaimon calls an end to his cycling career

Cancellara challenges Gaimon to a race after mechanical doping spat

He spent time training at the Valley Preferred Cycling Center in Trexlertown, Pennsylvania where he crashed while in a race. He sustained serious injuries that included fractures to five ribs, collarbone and scapula, along with a collapsed lung.

"They should still cover it as an in-network surgeon didn't exist," Gaimon said. "I never got a price or estimate. Just a bill a month later for $96,000."

In addition to the $96,000 bill from the second hospital, Gaimon said that he also received a medical bill of $150,000 from the first hospital that was in-network, and so can't be explained.

Gaimon said that he was under heavy medications during his stay at both hospitals and wasn't capable to making clear decisions on his own behalf.

"The first hospital was all emergency," Gaimon said. "I don't have any explanation as to why they're not covering that yet. That bill only came a few weeks ago for $150,000," Gaimon said.

"At all times I was on heavy narcotics and literally rolling around in pain, not really able to think. The decisions I made were just what could I do to feel alive again, or they were made for me."