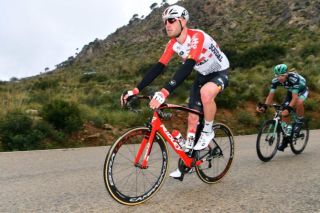 Frederik Frison has re-signed with Lotto Soudal for a further two years, which will keep him at the Belgian squad until at least the end of the 2021 season, the team has announced.

Frison has been with the WorldTour outfit since 2016, but rode for the squad's under-23 feeder team prior to that. He's mainly been employed in a domestique role, riding all the major spring Classics this season, and last year rode the Giro d'Italia, which was his first Grand Tour.

He's the nephew of former professional Herman Frison, who won a stage at the 1987 Tour de France and Gent-Wevelgem in 1990, and who now works as an assistant manager on the team.

The younger Frison missed much of the 2017 season due to injury and glandular fever, but bounced back last season with third place at Belgian one-day race Dwars door West-Vlaanderen.

"It was quite an easy decision to stay at Lotto Soudal," he said of his new contract extension on the team's website. "I feel good within the team, and I also know exactly what my role within the team entails, and what they expect of me.

"Lotto Soudal really is a group of friends. There's a family atmosphere and you can be yourself," continued Frison. "Of course, it remains your job and you need to perform, but how the team treats their riders is, in my opinion, not something you'll find just anywhere.

On his role within the team, Frison said: "I'm the type of rider that can ride really hard and I'm also a time triallist, so riding at the front of the bunch for our leaders suits me perfectly. When they perform well, or if, for example, [sprinter] Caleb Ewan finishes the job, it gives me great satisfaction, of course. That way, the motivation and the morale remain high.

"For the coming two years, my role will be more or less the same, but I want to take another step forward, especially during the Classics," he added. "My personal ambition is to support our leaders a little further in the finale. A second Grand Tour participation would be nice. It's always good to lay the foundations towards the future, and if there's a Grand Tour on my schedule next year, I'd be really looking forward to that."

Frison said that he'd had to miss the recent Cyclassics Hamburg due to illness, but that he hopes he's recovered sufficiently to ride the upcoming Deutschland Tour, which begins on Thursday.

"After that, I'll be at the start of the Tour of Britain and some Belgian one-day races. My race schedule for the end of the year is not yet 100 percent clear, but both Paris-Tours or the races in China are an option," he said.