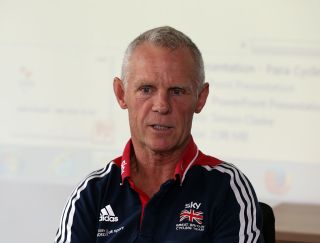 The claim was part of a series of questions that O'Rourke intended to put to Sutton during his cross-examination.

During Tuesday's ongoing medical tribunal hearing that is assessing Freeman's fitness to practise medicine, O'Rourke outlined the questions she had planned to ask Sutton. The claims and questions would be treated as "assertions, not evidence", according to a Press Association report.

According to a report in The Guardian, O'Rourke specifically claimed that a current British Cycling coach handed Sutton a soda can containing urine during an edition of the Tour of Ireland in an attempt to beat a doping test. She said the pair were caught and their team withdrew from the race to prevent the matter being pursued.

The Guardian reported on O'Rourke's further claims that Sutton had received drugs in a McDonald's toilet in Edinburgh around the time of the 1986 Commonwealth Games. She also said that Sutton had confessed to Dr Freeman that he used amphetamines as a rider and used his partner's phone to verbally abuse Dr Freeman after the doctor had blocked his own number.

Sutton has stated that he has never tested positive.

Sutton is the former head coach at Team Sky and British Cycling and is one of the key witnesses in the medical tribunal hearing that is assessing whether Freeman is fit to practice medicine.

Sutton was called by the General Medical Council to testify but walked out of the hearing in November after O'Rourke accused him of being 'a doper' and 'a serial liar' and a 'bully'.

O'Rourke wanted Sutton's testimony disregarded for being incomplete, but according to reports in the BBC on Friday, the tribunal ruled Sutton's evidence admissible.

Freeman has accepted 18 of 22 charges against him, including that he ordered 30 sachets of the banned substance Testogel and then lied to UK Anti-Doping about trying to cover it up.

He denies the accusation, formalized by the British General Medical Council, that he made the Testogel order knowing it was for an unnamed athlete to microdose testosterone.

Freeman's legal team is trying to have the remaining four charges thrown out. Freeman claimed that the Testogel was for Sutton, the former head coach at Team Sky and British Cycling.

Freeman claimed that Sutton allegedly bullied him into ordering the drug for personal use to treat erectile dysfunction. Sutton denied suffering from the condition and claimed that he had never heard of Testogel prior to the reporting of this case.