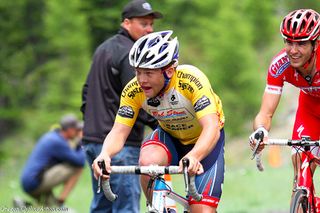 Former professional rider and 2013 US amateur time trial champion Logan Loader died early Thursday morning, according to an announcement on social media by the local union of which Loader was a member.

"It is with a heavy heart that we announce the passing of one of our own brothers and EMT’s Logan Loader," the Monterey County Ambulance IAFF L4513 wrote on its Facebook page.

"Logan passed away early this morning. We are truly saddened by the loss of one of our own. Logan is survived by his wife Amrita and his newborn son Nykolai. Our thoughts and prayers are with them and the rest of the family.

"Our immediate concern is the well being of his wife and son. We are actively working towards this end. Rest Easy brother, you will be missed."

Loader raced on the Continental and elite amateur levels, signing with Mountain Khakis in 2009 and then as an amateur in France for the following two seasons.

Loader signed with Team Exergy in 2012 and then moved to the amateur level again with CashCall [now Elevate-KHS], where he won stages at the Mt. Hood Cycling Classic and the 2013 USA Cycling Elite Amateur Time Trial Championship.

He signed with Italian Continental team Amore & Vita in 2014, but a positive test for a prohibited substance that he blamed on an appetite suppressant lead to an eight-month suspension.

He returned to Amore & Vita in 2015 before retiring at the end of the year and eventually becoming an EMT. No cause of death has been given.

Cyclingnews extends its deepest condolences to Loader's friends and family.

Former Amore&Vita rider Logan Loader passed away at the age of 30 pic.twitter.com/1tlA02tCkESeptember 6, 2019

Saddened to hear about the passing of Logan Loader today. He was always such a great example of doing the best with what you have and keeping a smile on your face no matter what. RIP my friend.September 6, 2019

REST IN PEACE: Monterey County Ambulance IAFF L4513 announced on social media that one of its EMTs passed away early Thursday morning. He is survived by his wife and newborn son. Read more: https://t.co/lI9zsgNmOQSeptember 6, 2019