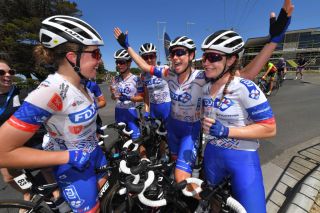 FDJ Nouvelle-Aquitaine Futuroscope team manager Stephen Delcourt has called for solidarity among women's cycling stakeholders amid the rescheduling of races that have been postponed due to the COVID-19 pandemic.

"Dear race organizers, Team Managers, female riders, representative associations, federations … and all the stakeholders! Let's come together to save the women's peloton and build a better future," Delcourt posted on Twitter Sunday.

Only one round of the 22-event Women's WorldTour has been contested this year, while 14 events have been either cancelled or postponed due to the novel coronavirus pandemic. There are currently only eight races that remain with their original dates.

The UCI has suspended all cycling races until July 1 but it is working with race organisers to determine date changes and trying to put together a potential late-season calendar.

The sport's governing body announced Wednesday the broad lines of the new calendar with a priority on the three Grand Tours, five Monuments, World Championships, European Championships and National Championships.

The press release noted that a revised version of the UCI Women's WorldTour calendar and a new version of the entire UCI International Calendar (men's and women's races across all cycling disciplines) can be expected by May 15.

The Cyclists’ Alliance Rider Council, an association for professional women riders, wrote an open letter to the UCI Friday expressing its concern that women’s cycling does not have adequate representation in the ongoing discussions surrounding the pandemic and race rescheduling.

Cyclingnews understands that the CPA Women's Chapter, led by Alessandra Cappellotto, has discussed the women's calendar with the UCI. She told Cyclingnews that her most recent meeting with the UCI was on Friday, April 17 to specifically address the women's race calendar.

Delcourt said that it is important for all of the stakeholders of women’s cycling to work closely with the UCI to figure out a new calendar but stressed that public health amid the COVID-19 pandemic should be the highest priority.

"The time is not for division, but for solidarity. Let's work hand in hand with the UCI, together we are stronger. It's vital if we want to relive great moments together," he wrote.

"Now, the health protection is our priority, then we can think about fighting  on the roads around the world!"