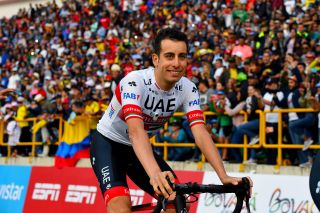 Fabio Aru (UAE Team Emirates) has spoken about the planned return to racing normality in August, saying that the rescheduled Tour de France is still in his plans for the condensed post-COVID-19 season.

In an interview with Sky Italia television program Casa Sky Sport, the 29-year-old told of his virtual training sessions with Vincenzo Nibali, UAE teammate Diego Ulissi and Tour of Flanders champion Alberto Bettiol, adding that the lockdown period had disrupted his comeback from iliac artery problems for the past two seasons.

"In the last two seasons I've been struggling, especially physically, and I've overcome a lot of problems," Aru said. "My recovery took months and I had prepared well for Tirreno-Adriatico, the Classics and the Tour de France.

"I didn't need this halt to racing but it's a problem much bigger than the sport. When we can return to racing, I'll be ready to prove myself."

Aru hits back at his critics after two years of doubts, surgery and illness

At last year's Vuelta a España, Aru was impeded by cytomegalovirus, but kicked off 2020 injury-free. Back in February, he said that he felt as strong as ever, but only competed in one race – the Tour Colombia 2.1 – before the season was halted as COVID-19 spread around the world.

Since then, Aru – like so many other pros – has been restricted to training indoors and taking part in virtual rides and races in the meantime. He's had company, though.

"For a month now, I've been riding with Ulissi, Nibali and Bettiol. It's a big incentive for me and I know I am for them, too. Every now and then we simulate some uphill races.

"There's some competition even outside real racing. Yesterday, for example, Nibali won, and I came second. I respect him immensely; he's going really fast."

It's still only May – around the midway point between the start of the full Italian lockdown in early March and the prospective start of racing at Strade Bianche on August 1 – but Aru is looking forward to getting back to action, assuming no further changes to the new calendar.

"It's going to be very strange [to return]," he said. "I hope we can get back to racing on August 1. We only have three race months but it's important to return with the necessary precautions.

"We have two months to work before we return. With modern methods [virtual training – Ed.], we can begin in good condition and we'll all be at the same level. It's going to be an intense season, but the teams have a lot of riders to tackle the whole programme. We'll hardly do 50 race days each."

Aside from the Tour de France, Aru hasn't yet confirmed a personal set of targets for the 'new' season. Riders and teams will still be working out exactly what they want to do in a three-month period that sees two Grand Tours overlap, and the Ardennes Classics held in concurrence with the Giro d'Italia, among other clashes.

Aru says that while a Tour-Giro double header looks too hard to properly compete in (the Giro starts just 13 days after the end of the Tour), a Tour-Vuelta schedule might work, with an additional 17 days separating the races and the opportunity to head to the Ardennes in between.

"I had the Tour de France and Olympic Games on my schedule but then it was all blown up. We have to take stock together with the team, dividing the squad up for the various competitions.

"It will be difficult to ride two Grand Tours. Maybe the Tour and Vuelta is possible because there's a month in between, but if you race the Tour you won't be able to go to the Giro."