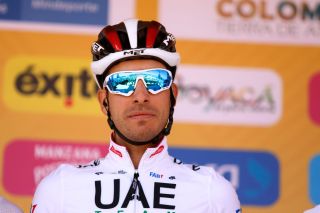 Fabio Aru (UAE Team Emirates) is hoping to bounce back from a challenging 2019 that saw him face surgery for an iliac artery issue early in the year and a bout with Cytomegalovirus that forced him to abandon the Vuelta a España after stage 12.

The 29-year-old Italian, who won the Vuelta in 2015 and has been second and third in the Giro d'Italia, says he is injury-free now and is feeling strong again on the bike.

Aru's main goal this year will be the Tour de France, where he is expected to ride alongside Tadej Pogačar, the 21-year-old Slovenian who recently won the Volta a la Valenciana as well as three stages last year at the Vuelta, where he finished third overall.

Fabio Aru to ride Tour Colombia 2.1 after recovering from Cytomegalovirus

Aru hits back at his critics after two years of doubts, surgery and illness

Aru finished 14th at the Tour de France last year, and he has changed up his schedule to take a new run at the Grand Boucle, choosing to start things off in South America at Tour Colombia 2.1 rather than in Spain or in the Middle East as he did in the past.

"For sure I am very happy to be here in Colombia," he told Cyclingnews Thursday morning before the stage 3 start in Paipa.

"It is my first time in Colombia, and I have discovered a beautiful country and beautiful people who really like cycling and cyclists. It's really important for us to have the support of our Colombian fans."

After Colombia, Aru's calendar will take him back to Europe for Tirreno-Adriatico, Liège-Bastogne-Liège and the Tour de Romandie, where he can look forward to considerably less-comfortable weather than what he is experiencing this week in Colombia, where he is also benefiting from a solid block of training at altitude.

"The weather is really nice here, and we are at 2,500 metres of elevation and in 30-35 degrees, so yeah, this is a very good start to the season," he said. "I will focus on the Tour de France, for sure. We have a good team, and this season has started really, really well with eight victories already, and we hope to continue that this week."

Although Aru has stated publicly that he feels very strong on the bike and has found joy in his training again, after five months away from racing he is unsure where his form stacks up against the rest of the peloton.

"For sure I am training well, but I don't know how is my condition, my form," he said. "I'm here to help the team 100 per cent and my teammates like Molano, who is in really good shape, and Sergio Henao for the general classification. I'm here to work and improve my condition.”

Aru will get a good indication of his form compared with the other riders when the race tackles the queen stage on the final day, a 182.6km test from reigning Tour de France champion Egan Bernal's hometown of Zipaquirá to the summit finish up Alto del Verjónm, which rests at 3,290 metres of elevation.

"For sure it will be a tough stage," he said. "We tried it last week, and after 3,000 metres it's difficult to breathe for us, the European guys, but we will try to do our best possible."