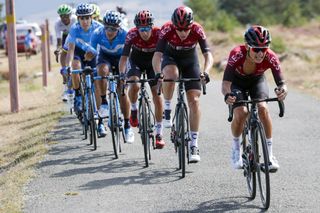 Kenny Elissonde has confirmed he will ride for Trek-Segafredo in 2020 and 2021, after spending four years at Team Sky and Team Ineos.

The French climber won the Ronde de l'Isard stage race as an Under 23 rider and the Angliru stage at the 2013 Vuelta a España but evolved into a domestique role at the British team.

He rode the Giro d'Italia and Vuelta a España but never managed to secure a place in Team's Sky all-powerful Tour de France squad. Elissonde will boost the climbing strength of the team and likely enjoy his Tour de France debut in 2020.

He has not ridden a Grand Tour in 2019 after being named as first reserve for the Vuelta a Espana, only for David de la Cruz to secure the final spot in Team Ineos' line-up.

Elissonde has long been linked to Trek-Segafredo for 2020 as the American WorldTour team transforms with the arrival of Vincenzo Nibali as Grand Tour leader. Also on the team's roster for 2020 are Richie Porte, Bauke Mollema, Giulio Ciccone, Mads Pedersen, Jasper Stuyven and Toms Skujiņš.

"I am obviously very happy to join Trek-Segafredo next year. I had extensive talks with Luca (Guercilena, Trek-Segafredo team manager) who right away convinced me of the team’s project. I am really looking forward to coming to Trek-Segafredo and starting to work with new people and learning new things," Elissonde said.

"In the next years, I hope to return to my aggressive way of racing and shine again while doing my utmost for the leaders of the team."

Guercilena said that the team have been tracking Elissonde for some time, and that the Frenchman would be used as a GC support rider at Trek.

"We have had an eye on Kenny for a while and found it was the right time to sign him," he explained.

"He is a solid climber and a proven team player, and we expect him to be a great support rider for our GC riders in the mountain stages, exactly what we need. I am pleased to have him on board, and we are looking forward to working with him in the next two years."