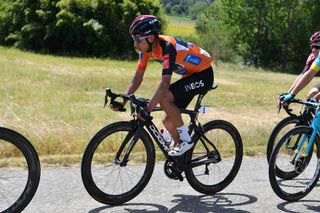 The Route d'Occitanie paid an emotional tribute to the late Nicolas Portal at the start of the race's final stage, with riders and watching fans applauding for a minute as Portal's wife Magalie and children Lenny, 11, and Ainoa, 7, stood on the start line with the team's riders and manager Dave Brailsford.

"It was obviously quite an emotional day today, remembering Nico," Team Ineos leader Chris Froome said at the stage finish in Rocamadour. "The last few days have actually been quite emotional because we've been on all of the roads that I'd come on with him to do recons. I spent a lot of time with him in this region and it brought back a lot of memories for me. It was great to see his family at the race this morning and also to see the tribute that the race paid to him with that minute of applause with his family."

Tour de France champion and Occitanie race leader Egan Bernal also thanked the race organisation for its show of support. "It was a nice tribute to Nico this morning and it was also nice to spend some time with his family. I think they're part of our team, part of our family, and it was nice to see them again. There's no doubt Nico will always stay with us," said the Colombian about the team's former sports director, who died of a heart attack in March.

Team Ineos' riders completed the stage in the best way by confirming Bernal's overall victory in what was the first professional race to take place in France since the end of the lockdown. "I'm really happy with the result. It was really important to win the race, for the team and for our morale because it's our first race after the lockdown," said Bernal. "But the most important thing is that I'm feeling really good, I think my preparation for the Tour is going well."

Bernal admitted that the closing sections of the final stage had been harder than expected, and particularly the climb up to the finish. "The good thing was that I felt really good and just tried to do a good effort up there. I ended up fourth and I was with the best riders, which was another good sign looking ahead to the Tour," he said.

Froome is also starting to focus a little more on the Tour de France having received confirmation that he's in his best state of form since his horrific crash at the Critérium du Dauphiné 14 months ago. "I'm really happy to have a race in my legs this season. It was the first time that I've really done anything on the climbs as well, so that was a nice little hit-out, a nice little test," the Briton said.

"It was great to be part of the team again and to come away with a fantastic result as well with Egan and Pavel [Sivakov] finishing first and second. It's great to have done that after such a long break from racing. I feel like it will really help to bring me up as we head towards the Tour."

Thank you to Route d’Occitanie for a beautiful tribute to Nico this morning ❤️ pic.twitter.com/9Zr4iy6ghNAugust 4, 2020