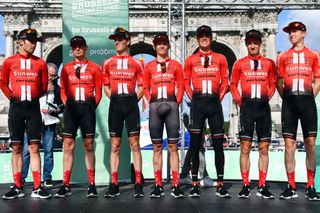 Edo Maas (Development Team Sunweb) is left with paralysis of both legs after a collision with a car that entered the race course on the descent of the Madonna del Ghisallo at the Piccolo Lombardia on October 6. The 19-year-old from Rotterdam, Netherlands, remains at the Niguarda Hospital in Milan where he is conscious and receiving treatment for his injuries.

"Edo is currently processing the diagnosis that the fracture in his back has led to paraplegia, a loss of nerve feeling in his legs," Team Sunweb published in a medical update on Thursday. "At this moment it remains unlikely that functionality in his legs will ever return, but fighting power and hope prevails."

Maas was immediately transported to nearby Niguarda hospital in Milan where doctors placed him under sedation to determine the extent of his injuries which included fractures to his neck, back and face. Maas underwent multiple successful surgeries before regaining consciousness two days ago.

"Edo is now fully conscious and has been awake for a couple of days, and responds well to family and visiting team mates," stated the team's medical update. "The fractures to his back and the injuries on his face required multiple intensive surgeries over the last week, all of which were successful."

Team Sunweb have released the latest medical update regarding Maas' condition at the request of his family, who are currently with him at the Niguarda hospital. Maas has received visits from family, friends and teammates.

Bonnefoix said that he believes himself to be one of few witnesses who saw Maas collide with the car on course while they were descending of the Madonna del Ghisallo.

He wrote in a post on Twitter that he and Maas were chasing to get back to a group on the downhill when a car entered the course from the right side and crossed the road. He speculated that the driver might have exited from a private driveway and didn't see the riders.

Bonnefoix estimated that they were descending at roughly 70kph when the car pulled out onto the course. Bonnefoix wrote that he was able to narrowly avoid hitting the car, but that Maas could not.

Following the latest medical update announcing Maas' paralysis, Team Sunweb have asked the UCI to make team and rider safety at races a priority in future.

"Whilst this won't undo this devastating tragedy, we once again call upon our governing body (UCI), to prioritise all of their time and resources on securing and ensuring the implementation of safe race conditions for teams and their riders.

"This week has been extremely difficult for the Team Sunweb family, of which Edo and his loved ones are and will always remain a central part. We send all of our strength and prayers to them at this difficult time."