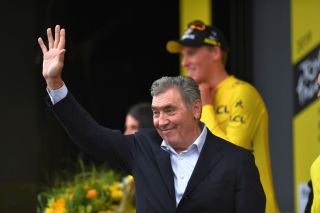 With question marks surrounding the future employment of Chris Froome, Eddy Merckx has suggested that the Briton needs to stay at Team Ineos if he is to join him on five Tour de France titles.

Froome needs one more yellow jersey to equal the record of five, held jointly by Merckx, Miguel Indurain, Bernard Hinault and Jacques Anquetil, but he faces a decision over where best to achieve it.

Cyclingnews broke the news last week that Froome, out of contract at Ineos at the end of the year, is in discussions with other teams for 2021 and even for a rare mid-season move this year.

Merckx: Van der Poel can win everything, even the Tour de France

Froome, who insists he has fully recovered from his crash last year, is set to have to share Tour leadership with Egan Bernal and Geraint Thomas, the last two winners, and Merckx believes he would be better off staying with Ineos than being the sole leader of a weaker team.

"I'm not sure how he is, nor if he recovered completely from the accident, Merckx told La Stampa.

"I heard he wants to leave Ineos perhaps because he can't stand the internal rivalry with Bernal and Thomas.

"But the feat of winning a fifth Tour will be very difficult for him if he doesn't have a team at his side like he had during his four victories in France."

Froome enjoyed the support of a strong Ineos squad as he won the Tour in 2013, 2015, 2016, and 2017. However, having first had to play second fiddle to Bradley Wiggins in 2012, he now finds himself competing for leadership once again.

Thomas came to the fore to win in 2018, after Froome had won the Giro d'Italia, but now Egan Bernal emerged as the leading light last year, becoming the youngest Tour winner in 100 years as Froome's career was under threat after his crash.

Bernal recently made a defiant statement about Tour de France leadership, which L'Equipe suggested did not go down well in the Froome camp.

"I’ve already won one Tour de France, and I’m not going to throw away an opportunity to win another Tour de France, that’s for sure," Bernal told Eurosport. "That I would sacrifice myself, being at my 100 per cent… I don’t think I’m going to do that, nor will he, nor will anyone."

The Tour de France will be the main objective for Froome, Bernal and Thomas, and it is also the main focus of the newly restructured 2020 season. Merckx acknowledged the importance of the Tour to the sport but he feels that other races, such as the Giro d'Italia and Classics, which overlap in October, got a bad deal.

"With eight calendar months concentrated in 90 days, some overlap was inevitable, but the Giro was not treated well. There was no respect. Some big Classics could also have been scheduled during the Tour," Merckx said.

"Nobody wants to deny the enormous importance of the Tour, from both an economic and media standpoint, but the other races that have made the history of cycling also deserve respect."