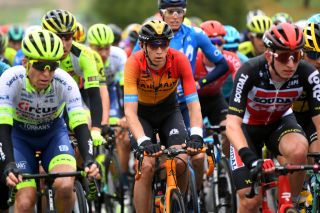 Bahrain McLaren have announced that Dylan Teuns has signed a two-year contract extension with the team. The Belgian joined the team at the start of 2019 having spent four years at BMC and has since put in a series of impressive performances to secure his future at his new team.

Last year, Teuns took a stage win at the Critérium du Dauphiné and went on to win the first summit finish of the Tour de France, La Planche des Belles Filles. He spent a day in the red jersey at the Vuelta a España after finishing second on stage 6, and this spring took a time trial win on the final day of the Vuelta a Andalucía.

"I feel great here. The team's ambition and spirit make it the best choice for me to continue improving my results," Teuns said in a team press release. "Last year I achieved two big victories, with the Tour victory being one of my career highlights.

"I am thankful for the chances that I get here, and I am sure that together we will achieve more of such victories in the future."

Team principal Rod Ellingworth, who joined the team from Ineos for 2020, said that he has been impressed by Teuns so far this season, singling out the 28-year-old's attitude for particular praise.

"Since starting with Bahrain McLaren, I have been very impressed by Dylan's attitude towards racing and training," Ellingworth said. "His versatility makes him a valuable mmber of our team, and I look forward to helping him achieve his dreams."

Originally thought of as a promising puncheur rather than pure climber upon turning pro back in 2015, Teuns has evolved as he has aged, turning in numerous strong rides on mountain stages across the calendar in recent years.

He's set to race Milan-San Remo next weekend before heading to France for a return to the Critérium du Dauphiné and Tour de France, where he's expected to support team leader Mikel Landa.

At Bahrain McLaren's Croatian training camp last December, Teuns set his sights on the Tokyo Olympics and the Tour of Flanders. While the Olympics has been postponed to 2021, Flanders is still on his calendar along with the full complement of Ardennes Classics and the World Championships in Switzerland.