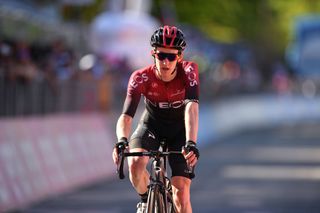 Ireland will go 'all in' for Sam Bennett in the men’s road race at the World Championships with the sprinter enjoying his best season to date.

The Irish men have qualified six riders for the road race and despite missing the experience of Nicolas Roche due to a knee injury sustained at the Vuelta a Espana, the squad head to Yorkshire with a line-up more than capable of producing a major result.

Bennett has been successful all season and most recently picked up two stage wins at the Vuelta to bring his tally to 13 victories this season. He is joined in Yorkshire by Conor Dunne, Ryan Mullen, Dan Martin, Eddie Dunbar, and Rory Townsend.

Dunbar will be making his debut in the elite race next Sunday and has also found recent form with a sixth place in last week’s hilly Giro della Toscana.

“We have a solid block of riders and I think it will be pretty good if everyone is fit,” Dunbar told Cyclingnews at the recent Tour of Britain.

While the consensus suggests that the men’s elite race in Yorkshire will be too hard for the pure sprinters, Bennett’s performances at the Vuelta offer hope that the Irishman can survive at least until the final two laps of the Harrogate circuit, when the likes of the Netherlands, Belgium, and France are likely to put the hammer down.

For Dunbar, his compatriot's condition is worthy of leadership within the Irish squad.

"Bennett is absolutely flying at the moment and if he has a good day at the World Championships I don’t see why he can’t compete at the pointy end of that race. We’ll go all in for him. People say sprinters can’t climb but you see Sam and he’s able to do it. A lot of other sprinters will be wary of him no matter what race he goes to from now on.”

The 2019 campaign has been a landmark year for Dunbar. The 23-year-old raced his first full season at WorldTour level, made his debut at his first Grand Tour riding the Giro d'Italia, and signed a three-year contract extension at Team Ineos after a string of impressive performances.

Ever a modest professional, Dunbar played down his results but pointed to the surprise Giro call-up – he was selected after Egan Bernal was forced to withdraw – as a major stepping stone in his career.

“It’s been solid. I don’t think that there’s been anything absolutely crazy about the year, results-wise, but it’s been solid and it’s been consistent. Getting injured in March wasn’t ideal but getting to do the Giro and stuff like that makes it a good season.

Dunbar only signed for Team Ineos after the mid-season demise of the Aqua Blue team in 2018. Since then he has thrown himself into WorldTour racing and taken every opportunity that has come his way. While it has been a steep learning curve he has relished the opportunity handed to him but he is also aware that he is still playing catch-up to some of the more experienced riders of his age.

"I’m still a bit behind the other guys in terms of racing and experience. I’ve carried a lot of injuries over the last few years but that’s just down to crashes and you have to just deal with them," he said.

"I’ve still a lot of catching up to do with the guys my age but I think I can get there with the more racing I do. It’s a physical thing really. I’ve not really raced at this level much since coming up through the juniors. I’ve not really been exposed to too much high-level racing until this year. The more I do of that the better I’ll get. I want to perform at the top level and not just the smaller races."

The three-year Team Ineos deal will carry Dunbar into what he and the squad hope will be the best years of his career. The longevity of the contract was a show of faith in the Irishman’s promise and ability.

"It means I can grow with the team," he told Cyclingnews.

"We have a really good group of young guys and they’re on long-term deals as well. There’s a core group now and the team wants to have us race together. Then build relationships as a unit and take over from the other guys retire. It’s going to be an exciting few years to be part of that. When I came to this team and saw how everything was done it was a massive relief to see how well a sports team can be run like that. It changed my perspective and it made me into a better rider and a better person."

Race plans for 2020 have yet to be discussed within the Team Ineos hierarchy but Dunbar is understandably keen on returning to Grand Tour racing.

"I enjoyed the Giro, I really did, and I finished it strong. It was massive to get the call-up. I think if you work hard and do everything the team says and be professional about everything and show that you want to be there then you put yourself in contention.

"I’d like to do a Grand Tour and go back to the Ardennes and do a better job there than I did this year. Id like to go into them with a bit more racing, with maybe Pais Vasco but as I said I want to make sure that I’m on an upward curve and improving at those races."