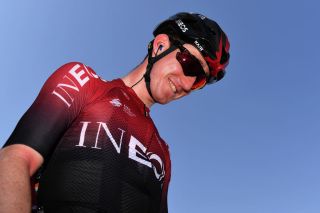 While it would appear that Mitchelton-Scott's Adam Yates has sewn up the overall classification at this year's UAE Tour, by virtue of his solo win at Jebel Hafeet on stage 3 on Tuesday, when he beat second-placed Tadej Pogacar by over a minute, Irishman Eddie Dunbar remains Team Ineos' best-placed rider, now up to 10th place overall after finishing in the same position on the stage.

The same summit finish will be used for Thursday's fifth stage, and Dunbar hinted that he might be among those riders planning on mounting a bid for a stage victory after moving himself up from his overnight position of 32nd place overall.

Although fortunes could still reverse for the top contenders come Thursday's climb, 23-year-old Dunbar is realistic about the top five positions likely having now been decided, although he still has the opportunity for a higher overall finish, as he's now on the same time as sixth-placed Wilco Kelderman (Sunweb), 2:06 down on Yates.

"I think a lot of guys won't go as hard into the climb maybe on Thursday so they can go up it a bit quicker," Dunbar said on his team's website. "The top three [five] guys on GC are pretty far ahead now, even compared to the times last year. There will be a lot of guys thinking about stage wins now compared to the overall, so it will be raced differently, I think.

"I actually felt quite good. My legs were good all day and the guys did a super job of keeping me out of trouble," he said. "We communicated very well, and, going into that last climb, we stuck to the right side of the road and stayed there until the bottom of the climb."

Dunbar praised his Ineos teammates – who include four-time Tour de France winner Chris Froome, making his racing comeback for the first time since crashing out of last year's Critérium du Dauphiné – for the work they did to manoeuvre him into position at the bottom of the climb, praising Michal Golas and Salvatore Puccio, in particular.

"Then riders started swarming a bit, just because everyone was fresh," said Dunbar. "It was super hot starting the climb, and the whole way up was pretty difficult. I never normally suffer in the heat but that was quite warm today. I did what I could."

Dunbar also explained that, while he normally prefers a 'punchy' climb like Jebel Hafeet, he "didn't really have it" on Tuesday's stage.

"I did try in the final 2km, and I got the gap, but I couldn't sustain it. Performance-wise it was good, but still a bit off the top guys, which is disappointing," said Dunbar, who will nevertheless get another try at it on Thursday's stage.