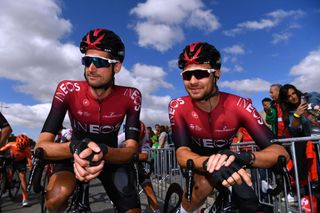 Last month, Owain Doull (Team Ineos) came through his maiden Grand Tour at the Vuelta a España and, after signing a new two-year deal, the 26-year-old has designs on an improved Spring Classics campaign in 2020.

The former track rider has been on Team Ineos’ books since 2017 but it took until his third year in the WorldTour to be given his Grand Tour break. He rode as a domestique throughout the race and finished 71st in Madrid. While that result made few headlines, the fact that the Welshman has three weeks of constant racing in his legs should ensure that he starts next season on the front foot.

"I really enjoyed the Vuelta. At first, I was wondering if my head or legs would fall off in the second or third week but I felt like I grew into the race as it moved on," Doull recently told the press.

"At first I felt that it would be daunting, having to race for so many consecutive days, but you find some rhythm and then you find some balance. I’m looking forward to next year and hopefully get another one under the belt."

Doull had been hoping to make his Grand Tour debut in 2018, during his second year at WorldTour level. However, he missed out due to the nature of Team Sky/Team Ineos’ stacked stage racing line-up. According to Doull, even making the Vuelta team this year was a step forward.

"Especially on this team, where there’s such an emphasis on Grand Tours. It gives you experience but also physical gains. A lot of guys have told me that if I do the Vuelta then it would set me up for next year when I start training after the off-season. Hopefully, that will lead to more progression in the Classics."

Doull claimed a surprise second place in Kuurne-Brussel-Kuurne back in February of this year, in what was a breakthrough performance. He finished the rest of the 2019 Spring Classics with Milan-San Remo, E3 Harelbeke, the Tour of Flanders and Paris-Roubaix all raced.

The 2020 Spring campaign will be the first major objective of Doull’s season and he is keen to land another standout performance as early as possible. Another ride like the one he produced at Kuurne earlier in the year could land him greater responsibility further down the line.

"The Classics will be the main focus again. I want to try and improve on what I did in the Opening Weekend last year and move that into the main block of races in the spring with Harelbeke, Gent-Wevelgem, and those races," Doull said.

"I just want to try and go deeper into the finales. I also need to be good in the Opening Weekend again as Ineos will have quite a lot of guys, so you need to show yourself early to have opportunities to race for yourself."