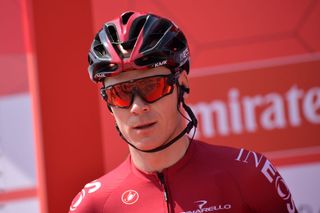 Doubts about Chris Froome's ability to win this year's Tour de France have emerged from within the Team Ineos camp, with technical director Carsten Jeppesen saying "a lot has happened" since he last won the Tour.

Froome is aiming to join Eddy Merckx, Bernard Hinault, Jacques Anquetil, and Miguel Indurain as five-time champions, but Jeppesen cited his 35 years of age and his serious crash last year as complications.

After finishing second behind Geraint Thomas at the 2018 Tour, following his Giro d'Italia victory, Froome suffered career-threatening injuries last June and was forced to watch from home as a 22-year-old Egan Bernal claimed the yellow jersey.

Guimard: Chris Froome is the gunpowder that could spark Ineos explosion at Tour de France

Claiming he is back to full fitness, Froome is set to line up alongside Bernal and Thomas at this year's Tour but will leave the team at the end of the season to move to Israel Start-Up Nation.

"There is no doubt that he has put a lot of work into it. As always, Chris has been a fantastic athlete and incredibly dedicated. I do not believe that there's anyone who has trained as hard during this coronavirus crisis as he has," Jeppesen told Danish broadcaster TV2.

"But I'm not 100 per cent sure that he will get so ready that he is where he needs to be to be able to win. A lot has happened since Froome won last. We have won the Tour with both Geraint and Egan, and Froome has grown older and has been subjected to a very, very serious crash last year."

Jeppesen has worked with the team since its inception in 2010 and currently holds the official title of Head of Technical Operations and Commercial, tasked with managing the equipment the riders use, along with sponsor relations.

While Jeppesen's comments will reignite the debate over the internal hierarchy at Team Ineos, there are still doubts about whether the team will take Froome to the Tour at all. Despite his impending transfer, Jeppesen does not see Froome giving anything less than 100 per cent for the team, and believes that having three leaders won't cause problems.

"Now we have known Chris and worked with him for many years, and if there is one thing you can say about him, it is that he is a professional at your fingertips," he said.

"With it being decided out on the road, it may sound a bit like a phrase, but by and large that's the way it is - the best man wins. I really think they all have so much respect for each other that it becomes no problem."

Froome will return to action at the Route d'Occitanie on August 1, where he is set to line up alongside Bernal, while Thomas is expected to join them for the Tour de l'Ain and Critérium du Dauphiné ahead of the start of the Tour on August 29.