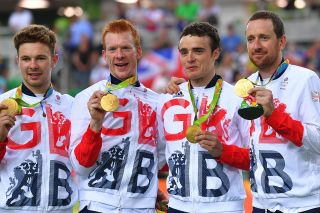 Steven Burke, part of the successful British team pursuit squad that won back-to-back Olympic titles in 2012 and 2016, has announced his retirement from cycling.

The 31-year-old, who also won a world title and three European titles, hangs up his wheels after 14 years racing on the track with British Cycling.

"Looking back on my career, I can only be proud of becoming an Olympic, world and European champion, achieving all I’ve wanted to in red, white and blue with my mates," Burke said in a statement from British Cycling.

"I am forever grateful to my family, girlfriend, close friends and everyone who has helped me over the years."

Burke won national and European titles at junior and U23 level before making a splash in his first Olympic Games in 2008, winning the bronze medal in the individual pursuit in Beijing.

He went on to form an integral part of the British team pursuit squad that broke their own world record four times. At the 2012 Olympics in London, he, Geraint Thomas, Peter Kennaugh, and Ed Clancy clinched the gold medal with a world record ride against Australia. Four years later, they once again beat Australia with a world record to claim gold, with Burke this time partnered by Clancy, Bradley Wiggins, and Owain Doull.

"Firstly, I would like to thank all of my team mates throughout the Great Britain Cycling Team. I have enjoyed working with them all. It has been an epic journey achieving Olympic gold with Geraint Thomas, Brad Wiggins, Pete Kennaugh, Owain Doull and Ed Clancy and I will look back on some great moments with them," Burke said.

"I would also like to thank all of the support staff at British Cycling, from the past to the present. It has been fantastic to be involved with such a world-class outfit. Although I have retired from international duty and looking forward to new challenges, I still plan to race in the Six Day events, help out the local riders in Team SB Hub and Cycle Sport Pendle, and to ride my bike for years to come.

British Cycling performance director Stephen Park added: "Steven Burke is an incredible rider and has been a mainstay of our team pursuit squad in both the academy line-up and the podium line-up, where he won two Olympic gold medals and broke the world records that stood at that time.

"Even in his junior and under-23 days on the squad, Burke was up there winning medals for the team on the international stage. In 2008, he was a reserve rider on the Olympic squad and he was able to step in and turn this into a bronze medal at such a young age which is applaudable and a sign of Steve’s tenacity as a bike rider.

"On behalf of everyone on the team, riders and staff, I’d like to congratulate Steve on his achievements and wish him well in the next stage of his career. He leaves the Great Britain Cycling Team knowing that he has done our jersey proud."