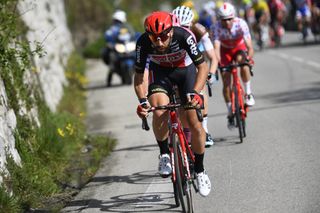 Thomas De Gendt received a nasty surprise when he hit 550 watts in a Zwift race this week, with his avatar slowing to a snail's pace despite him pedalling full throttle.

The online virutal cycling platform suspected foul play, and pulled him out of the race.

"Either you missed your calling as a pro, or there is something wrong with one of your devices," read a message on De Gendt's screen.

De Gendt took to social media to say to Zwift: "I got thrown out of a race because of my superhuman power. Can you fix the stats for me?

How to race on Zwift - top tips and setup advice

Zwift relies on people being honest about their weight, as their speed is judged by their power-to-weight ratio. To try and prevent people cheating, it sets limits for what is considered realistic power output, and De Gendt's numbers clearly raised red flags.

De Gendt later explained that he was showing teammate Tim Welleens how to use Zwift since Lotto Soudal will be entering online races given the road season is on hiatus.

"On a climb I just did the numbers that I more or less push in a race. Suddenly I was blocked and neutralized by the game," he told Het Nieuwsblad.

"You may still pedal so hard, but you are still set at a low speed. That's a bit of a shame when you're on a race. ”

"The numbers were not so special. For a while 500 to 550 watts. As a cycling tourist it may be unrealistically high, but for us as pros it is more or less normal if you want to win a race."

De Gendt backed up his calls on social media for Zwift to loosen their restrictions. With a host of professionals set to use Zwift and other online platforms over the course of the coronavirus pandemic, there might be no other option.

"It is only a game of course on Zwift, but I have a logo behind my name that I am a pro, so I hope they those values can be lifted a bit," De Gendt said.

"Those races on Zwift are just perfect training for me. Training in blocks outdoors is a bit difficult here with all those flat roads. While on the rollers you can ride a short race, so that is perfect for riding 17km full gas."