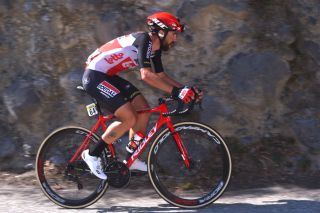 Thomas De Gendt (Lotto Soudal) will target this year's rescheduled Tour de France and the Vuelta a España, and is looking forward to seeing how he and his colleagues will react to the resumption of racing following the enforced break this season due to the coronavirus pandemic.

"I want to be at 95 percent of my top shape in early August, and I want to keep that shape for three months. I used to do that, too," De Gendt told Sporza.be on Tuesday.

"Those first race days will be very nervous, and I already think I'll need more time than others to get used to being in the peloton again," he said. "After that, it will be as it has always been. Everyone will reach their physical limitations, and then everyone will soon know their place again."

Having spent the past few months at home, De Gendt and his family made the 1,800km journey by car from Belgium to Calpe, Spain, on Friday evening, in order for the 33-year-old to train ahead of the remainder of the racing season.

That time at home, De Gendt said, meant that he was "no longer afraid of the black hole after my career" after experiencing, and enjoying, life with his family, away from the rigours of professional sport.

No Classics or Worlds?

According to Sporza, De Gendt will begin his season at the Tour de Pologne (August 5-9), followed by the Tour de Wallonie (August 16-19) and the Tour de France (August 29-September 20), and then the Vuelta a España in October.

While the World Championships will take place in Switzerland from September 20-27, De Gendt said that he didn't expect to be selected.

"I've been forgotten all these years, why would it be any different now?" he said.

De Gendt said that he wouldn't be riding the one-day Classics, either, and would instead concentrate on the shorter stage races and the Tour and the Vuelta.

"That short succession of races looks as though it could count in my favour," he said, "although it remains to be seen for everyone what mental and physical damage might have been caused in recent months."