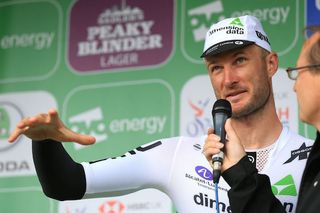 Steve Cummings (Dimension Data) ahead of stage 5 of the 2019 Tour of Britiain (Image credit: Getty Images)

Dimension Data have provided a medical update on their rider Steve Cummings, who crashed out of the recent Tour of Britain on stage 5, reporting that the British rider has fractured four vertebrae in his back and will be out for the rest of the season.

Philippa York analysis: Cummings shows he still has what it takes at Tour of Britain

"He underwent thorough diagnostics at the neurosurgical department in Liverpool and was found to have fractured four vertebrae of the thoracic spine," read the team press release. "Luckily, no further neurological damage occurred and an operation is not necessary.

"Under conservative treatment, he now needs to fully recover and will not be able to participate in any further races until the end of the season," it read. "We would like to extend our gratitude for all the messages of support we've received for Steve, and wish him a speedy recovery."

The announcement has added significance in that Cummings' contract with the team is up at the end of this year, meaning that he may have raced professionally for the last time, if not offered a renewal or a new contract with another team.

Cummings told Cyclingnews the day before his crash that he hoped to race for one more season in 2020 – ideally with Dimension Data – but that if he's not offered a contract, he'll accept that his professional cycling career is over, and will move on with the next phase of his life.

"I haven't spoken to the team yet, and they haven't approached me," he said. "I'm not worried because I've always done my best, and am just looking forward.

"If it is my last year, then I'm also happy with that," he said. "It could be my last time at this race – it could be for all the next races – but that's OK.

"I'm studying for a degree in Business and Sports Management," Cummings also told Cyclingnews. "I want to get a degree, but it's not about the bit of paper. I want to study, to learn, to keep learning. I think that's important in this sport. Whatever I do, I want to make a difference, be open to change and not just say to people I was a bike rider for 15 years and I know everything. It's quite the opposite of that. I want to keep learning."