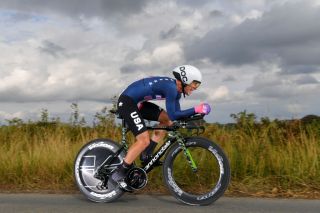 Lawson Craddock (USA) took inspiration from Chloé Dygert Owen's stunning performance in the elite women's time trial to follow up her performance with sixth in the men's race at the World Championships.

Craddock, who finished fourth in the long Vuelta a Espana time trial, finished just 13 seconds off the podium on Wednesday with a ride that also helped secure the US a valuable second spot in next year's Olympic time trial in Tokyo.

"That was brutal. With a 55km time trial you never really know what to expect. You can expect a lot of pain, everywhere, and I think that's what we got today. It was a fun course, and extremely challenging. There were points where it was hard to find a rhythm, but in the end, you know that you're going to have a worthy winner. I can be pretty happy with how I raced," Craddock said at the finish.

The American's ride came 24 hours after Dygert Owen's resounding win, and Craddock said that his compatriot's effort had lifted the already positive mood in the camp.

"The U23 men and what Chloe did was incredible," Craddock said.

"They set the bar high for everyone, across every platform. Chloe just showed herself as a truly phenomenal talent. The nation was excited and proud of her efforts, as well as all the preparation she put into it. You see that and it inspires you."

Craddock came into the Worlds on the back of his solid ride at the Vuelta, but he added that missing out on the Tour de France in July had given him extra motivation. The American made the short list for the Tour but was overlooked in the days leading up to the race. Instead of letting his head drop, he refocused on the Vuelta, where he picked up a string of top-10 performances.

"For sure I was disappointed to miss out on the Tour. It was a really big goal of mine, but at the end of the day, the Vuelta is a prestigious race and a tough race. If you can prove yourself there then it's almost just the same.

"I came out of it feeling confident in my abilities. It was a truly difficult Vuelta this year, but I felt like I was able to turn a page in terms of my development. I raced, finally how I felt that I should be racing. I was getting in breaks and really racing. I enjoyed my experience there and I'm grateful to the team for giving me the opportunity."

The 36km time trial at the Vuelta provided an indication of Craddock's condition, but the Yorkshire course was a full 18km longer in length and offered a grueling examination of riders' mental and physical resolve. Rohan Dennis (Australia) was in a league of his own and came away with the win, but Craddock more than held his own. He finished well ahead of Vuelta winner Primoz Roglic and UCI Hour Record holder Victor Campenaerts.

"The Vuelta time trial was around 55 minutes so I guess this was similar, but an extra 10 minutes makes a big difference. You just try and prepare for it as best as you can," Craddock said.

"The Vuelta can almost be hit or miss in terms of preparations for the Worlds. I was fortunate that I could get home pretty quickly and spend a relaxing week with my family. That was what I needed more, a mental reset after the Vuelta. I felt good today and hopefully, that stays the same for Sunday."