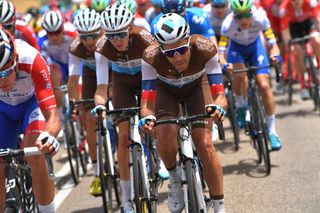 AG2R La Mondiale have announced contract extensions for three of their riders, with former US road race champion Larry Warbasse and Frenchman Mickaël Chérel both signing for a further two seasons, while Luxembourg's Ben Gastauer has signed a one-year extension.

"Really proud to be continuing my career with AG2R La Mondiale for another two years," Warbasse wrote on Twitter. "It's an honor to be here and I can't wait for big things to come."

The 30-year-old American found himself without a squad following the collapse of the Aqua Blue Sport team in 2018. He and then-teammate Conor Dunne decided to head off on 1,100-kilometre training trip around southern Europe together, which they dubbed the NoGo Tour, replicating the kind of distance they would have raced at the Tour of Britain were it not for their team's demise.

It brought the pair considerable media and fan interest, with Warbasse signing for AG2R for the 2019 season and Dunne securing a place at the Israel Cycling Academy squad, although the Irishman subsequently retired at the end of last season.

Like Warbasse, 34-year-old Chérel has signed a two-year contract with the French WorldTour team AG2R, which he joined back in 2011 from Française des Jeux.

Luxembourger Gastauer, meanwhile, has signed a one-year contract extension, and the 32-year-old will start his 12th season with manager Vincent Lavenu's squad in 2021.

"We are delighted to continue the adventure with Mikaël, Ben, and Larry – three important riders in our squad who are all excellent at giving everything they can for the collective success of the team," said Lavenu on the team's website on Tuesday.

"Mikaël is a talented rider, especially in the mountains, and a respected road captain. Ben has been wearing our colors for 10 years, and is one of our most valued team members. Larry, since joining the team, has proven his personal and athletic qualities," Lavenu said.

Warbasse will line up alongside team leader Oliver Naesen when the UCI WorldTour resumes – following the sport's shutdown due to the coronavirus pandemic – at Strade Bianche in Italy on Saturday.

Really proud to be continuing my career with @AG2RLMCyclisme for another two years 😍. It’s an honor to be here and can’t wait for big things to come! #AllezALM https://t.co/9KARMb0wbRJuly 28, 2020