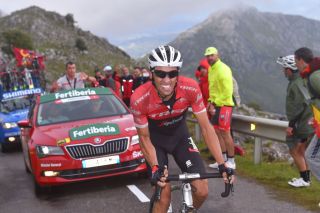 The images of Albert Contador winning on the Angliru two years ago drew the loudest applause by far at the presentation of the 2020 Vuelta a España route in Madrid on Tuesday evening.

For many Spanish fans, and for others worldwide, Contador’s spectacular departure from professional cycling, winning on the last mountain stage of his career on Spain’s toughest climb, remains a hugely memorable moment.

And the Spanish Grand Tour specialist acknowledged that watching the footage of that stage still makes him emotional.

"When you turn pro, you see retiring from cycling as something a long way off, but it was a dream finale for my career,” Contador admitted.

Alberto Contador: The five races that changed my life

Contador: It will be tough for Spanish cycling to repeat this decade's achievements

The Angliru returns to the Vuelta a España in 2020, coming one day after the ascent to the Farrapona, also in the mountains of Asturias, and where Contador won in 2014 en route to his third and last overall victory in the Spanish Grand Tour.

“The Farrapona will be a really hard stage next year,” Contador suggested. “Climbs on the same day like San Lorenzo and the Corbertoria which precede the Farrapona itself are extremely difficult and they could split the race apart even before you get to the last ascent. All in all, that’ll be a key stage for the Vuelta.”

24 hours later, the peloton will face the Angliru, where Contador won both in 2008 and again nine years later.

“The Angliru is a climb which is so hard you can only go up it slowly, but it’s going to be a really crucial ascent,” Contador predicted.

“These two stages, on the Farrapona and Angiru, are maybe going to be the ones that really decide the Vuelta, particularly coming where they do in the race at the end of the second week. The weather often turns bad in Asturias at that time of year as well, which will make them even more difficult. The third week? That’s not so clearly decisive.”

While much of the media attention focussed on the big, classic mountain stages, Contador tipped the Suances stage in the second week, which immediately precedes the set-piece battles on the Farrapona and the Angliru as an example of where the race could break apart unexpectedly.

“One thing I like about this Vuelta is there are lots of opportunities for riders to fight back on stages like the one to Suances, or turn the race in their favour,” Contador said.

Indeed, the stage to Suances in the 2008 Vuelta, as Contador recollected, was where he and Paolo Bettini formed an alliance to attack Alejandro Valverde, who unwisely dropped back to his team car for a rain jacket precisely at the wrong moment as the race was splitting apart, and as a result lost all chance of winning the Vuelta.

“The Tourmalet is going to be mega hard and having the Aubisque and Soulor on the same stage, particularly in a time of year when it’s so hot, could be really important,” Contador said.

“But I like the stages where there can be ambushes, too. And as the ones in Asturias on the Farrapona and the Angliru – personally, they matter a lot to me and that could be where the Vuelta is decided as well.”