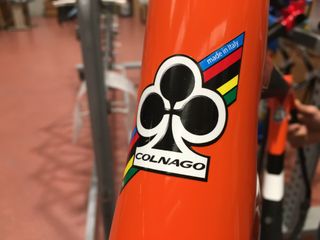 Iconic Italian bike manufacturer Colnago is about to embark on a new chapter, with a UAE-based investment fund having acquired a majority stake in the company, which will nevertheless continue to be based in Cambiago, Italy.

What is one of the most celebrated brands in cycling has been crafting race-winning road bikes since the 1950s, and founder Ernesto Colnago has managed to evolve his frames over six decades without sacrificing the merits of its Italian craftsmanship.

As Italy slowly emerges from its COVID-19 lockdown, Colnago has announced that it will henceforth be operating under new ownership. The company's fabrication facilities and staff will remain in Cambiago, but strategic direction is now the prerogative of Chimera Investments LLC.

Ernesto Colnago: A lot of people don't understand the real quality of a bike

Having acquired a majority shareholding, the Abu Dhabi-domiciled investment fund has confirmed that it is now the owner of Colnago, although it's been suggested that traditional fans of the brand can expect little deviation from Colnago's revered road-cycling values.

"We would like to thank the master of the design and invention of great bikes Ernesto Colnago, and we would like to follow his path and move forward in his legacy bringing Colnago to a bright future as no one else would. Mister Colnago will always be the Godfather and the guiding force of the new developments," a statement released on Monday by the new owners read.

With the security that majority ownership from a wealthy Abu Dhabi investor brings, Colnago's designers and framebuilders can focus on developing the brand's next-generation of products. But it also possibly heralds the end of an era for a doyen of Italian design. The 88-year-old Ernesto Colnago, who founded his company in 1952, may now be able to consider retirement, which would leave a legacy with few equals.

From steel to aluminium, and then into the realm of composites, Colnago's frames, forks and wheels have always been considered the gold standard. The brand's frames have won all the most esteemed Classics and Grand Tours, and the investment from Chimera Investments LLC appears to have shored up Colnago's future.