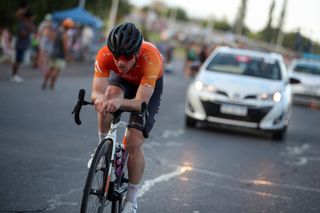 Colin Joyce has become Rally Cycling’s man for all seasons. The talented all-rounder from Pocatello, Idaho, can mix it up with the WorldTour sprinters, set up his teammates for a result on the climbs for a general classification run, or target wins from a breakaway.

The 25-year-old, who counts stage wins at the 2016 Tour of Alberta and 2018 Arctic Race of Norway among his palmares, started his 2020 season at the Vuelta a San Juan in Argentina, where he finished eighth in the 15.5km individual time trial and 10th in a bunch sprint contested by Peter Sagan (Bora-Hansgrohe), Alvaro Hodeg (Deceuninck-QuickStep) and UAE Team Emirates' Fernando Gaviria and Sebastian Molano.

Last week he was in the high-altitude conditions at Tour Colombia 2.1, where he twice finished in the top 10 in field sprints and then jumped into the breakaway on Sunday's queen stage. Joyce was also the final Rally rider to set up Gavin Mannion for an impressive 14th-place result on the first summit finish of the race on stage 4 to Santa Rosa de Viterbo.

"It's been a good week so far," Joyce told Cyclingnews before the start of Sunday's stage. "I'm just trying to be closer to the front of the bike races and do what we can to be competitive here, so it's nice to be in the mix. It's just been a fun week with some hard racing."

Hard might be an understatement. The race in Colombia never set foot below 2,500 metres of elevation, and the final stage to Alto del Verjón finished at 3,290 metres. Not deterred by the daunting elevations and the thin air riders find there, Joyce made the final breakaway of the race with fellow Idaho native Matteo Jorgenson (Movistar), taking it to the stage before finally succumbing to the elevation and the relentless pursuit of the pack.

"I grew up at 4,500 feet. It's not super high, but it's altitude," Joyce said, commenting on his ability to adjust to the high reaches of the South American mountains.

"You can't ever really get used to 9,000 feet unless you live up here," he said, "but at the same time, the key is not to go too into the red. Once you get there you can't panic otherwise you're done for. You just have to stay within your limits. In the bike race, you can feel when you're starting to get pretty deep, and if you go too deep you're just done."

Despite telling Cyclingnews he doesn't consider himself an escape artist, both of Joyce's professional wins have come from breakaways. In 2016 at the Tour of Alberta, while riding for Axel Merckx's Axeon development team, he survived a complicated opening stage in Lethbridge that saw several moves go up the road then fall prey to the chase before more moves slipped away. Joyce eventually out-sprinted Alex Howes (EF Pro Cycling) and current teammate Robin Carpenter to take his first pro win.

In 2018, riding for Rally at the Arctic Tour of Norway, he made the move that stuck and then out-sprinted Dutchman Dennis van Winden (Israel Cycling Academy) for the win.

"I haven't actually been in too many breakaways," he insisted on Sunday. "I read an article in [a US  publication] the other day that said I was a breakaway rider, but I've only been in three breakaways. It's kind of fun on some days that I'm not really suited for or days to just be part of the bike race and get off the front and mix it up a little bit. I wouldn't call myself a breakaway rider, but someone who's just trying to race his bike and have a little fun."

In Colombia, Rally's breakaway specialist, Robin Carpenter, was suffering in the altitude and from a stomach bug, so the team focused on the general classification hopes of Gavin Mannion. Joyce went all in for his teammate on stage 4, which finished with the Alto de Malterias at 2,732 metres just 2.9km from the line.

Joyce guided Mannion through the chaos of urban Duitama to put his teammate near the front at the bottom of the final climb. Mannion described the finale as "crazy fast" and credited Joyce for the help, with his teammate's ability to handle himself in field sprints playing a crucial role in Mannion's success.

"The run into the final town, 10km out, was raced like a sprint finish," Mannion said. "Luckily the team set me up perfectly for that. And then I had Colin looking after me in some of the chaos through the town and into the start of the climb."

After his work for Mannion was done, Joyce shut things down and soft-pedalled in, absorbing and enjoying the cheers of the overly enthusiastic Colombian spectators.

"I was coming up by myself off the back, and it was cool riding through a tunnel of people," he said. "They're all screaming for you and they move out of the way at the last second. I'm in 150th place pretty much, and they're still treating me like I'm winning the bike race or something. It was a cool experience.

"There's a ton of them, but it's awesome to see," he said of the roadside spectators in Colombia. "It's really cool to have them all out, it's just that sometimes they're a little too far in the road, which can be a little dangerous. But, with that said, it is also awesome to have so many fans and spectators out watching."

Joyce won't likely race in front of crowds that size again when Rally heads over to Europe later this spring for the team's first block of racing in Italy and France. But first, he'll go back home to Idaho for a break, then to Santa Rosa, California, for some warm-weather training. He's obviously hoping for some results on the European trip, but he told Cyclingnews he doesn't have any specific races targeted.

"It's kind of hard to target a specific race because you could have a bad day or something," he said. "It's more kind of focusing on a certain time period. Then if you're riding well you're riding well and any race could kind of be a race that goes well. My goals are to just keep developing, keep getting better and better and kind of the same as every year: just keep trying to find the front of bike races more and more."

True to Joyce's all-rounder nature, he doesn't have a favourite type of race and couldn't choose between one-day events or stage races, saying he likes "all of it."

"I haven't done a lot of one-day races," he said. "Last year we started to do more and they were pretty fun. We've got quite a lot more this year on the schedule, so I think it will be fun to mix those up. I mean, anytime I'm out racing my bike I'm having fun."