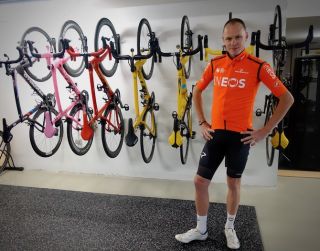 Chris Froome has said that a new generation of young talent, including his Team Ineos teammate Egan Bernal, has "raised the bar" for him as he seeks to regain full fitness and win a record-equalling fifth Tour de France.

Froome missed last year's Tour after fracturing his femur, elbow and ribs in a crash on the Critérium du Dauphiné. In his absence, Bernal claimed overall victory ahead of 2018 winner Geraint Thomas.

Froome is set to join the pair in the Team Ineos line-up for this year's Tour, which has been rescheduled for August 29-September 20, with all three told to prepare for a possible leadership role.

In an interview with Raymond Kerckhoffs in Dutch magazine Helden, Froome hailed the ability of Bernal, Tadej Pogacar (UAE Team Emirates) and Remco Evenepoel (Deceuninck-QuickStep), and he said that their arrival in the peloton had served as a motivation.

"It's true that a new generation has risen and that we look like old guys," Froome said. "Riders like Evenepoel, Pogacar and Bernal are phenomenal. It’s hard to believe how well they are performing at such a young age. I see it as something fantastic, a huge boost for cycling.

"They’re also making cycling challenging for us 'oldies.' But their development is a motivation for me to do even more. We can't continue preparing for the big races as we did in the past. The bar has been raised by these super talents and we will have to match that. We also have to look for improvements on every level, be it in our training or in our nutrition. If we want to defeat these young guys, we will have to push our limits."

Froome's interview with Helden was published this week but took place at February's UAE Tour, where he returned to racing for the first time since his crash at the 2019 Dauphiné. Although Froome underwent an arduous rehabilitation programme during his lay-off, he said that the lay-off from racing had also served to recharge his batteries.

"I'm going to do everything I can to get back to my old level or even become stronger," Froome said.

"The willpower to achieve that is enormous. You know, it feels like that forced break of six or seven months off the bike has given me extra energy. When I've finished my long workouts now, I don't feel any fatigue the day after. In fact, I am eager to push my limits again in the morning. I am so fresh in my head. I have a huge desire to fight for victory again on the front."

Despite reports of a possible mid-season transfer, Froome may have to vie with Bernal and Thomas for leadership of Team Ineos at the Tour de France, which is scheduled to get underway in Nice on August 29.

Carrying the maillot jaune to Paris for the first time since 2017 and the fifth time in total, Froome said, was his overriding ambition.

"The Tour de France is by far my most important challenge. A fifth Tour victory is something unique," Froome said.

"That milestone has been the motivation for me in all those difficult months to get back to the highest level. To achieve the same number of overall victories as Jacques Anquetil, Eddy Merckx, Bernard Hinault and Miguel Indurain is something big."