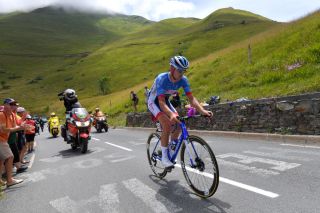 Calmejane heads in the opposite direction of Pierre Latour and Alexandre Geniez, in what has been a busy period of comings and goings at AG2R ahead of the 2021 season, when the team become AG2R Citroën Team.

Calmejane, 27, has spent the past five years of his career at Jean-René Bernaudeau's team, formerly known as Europcar, having graduated from the Vendée U feeder set-up. He has won stages at the Tour de France and Vuelta a España but felt it was time for something new.

"I have a very strong history with Vendée U and then Jean-René Bernaudeau's team, they allowed me to turn professional and I will not forget that. Still, after five years on the same team, I felt the need for a new challenge. Discovering new teammates, new equipment, new races, and winning my place in the squad too," Calemjane  said.

"I am really happy to start with AG2R la Mondiale, I feel like I’m starting a new career. I know that I will find riders my age, but also younger guys who are very promising. I know the team enjoys a great dynamic and I am very much looking forward to this new challenge."

Calmejane is one of a number of new faces at AG2R for 2021, with Greg Van Avermaet, MIchael Schär, and Gijs Van Hoecke joining from CCC Team,  as well as Stan Dewulf from Lotto Soudal, Marc Sarreau from Groupama-FDJ, and Damien Touzé from Cofidis. In addition to Latour and Geniez, they are losing Grand Tour leader Romain Bardet, who has signed for Sunweb.

While much of the recruitment so far has centred around the Classics department, Calmejane, who rode the cobbled Classics last year, is more of an all-rounder. He has won stage races at the Etoile des Bessèges, Settimana Coppi e Bartali, and Circuit Sarthe, as well as the one-day Paris-Camembert, and both the Ardèche and Drome Classics, and the two Grand Tour stages.

His Tour de France win came from the breakaway in the medium mountains as part of a break-out 2017 campaign that featured seven wins.

"Lilian has already shown all his potential by winning at the Vuelta but also at the Tour de France. He has a strong character and he is capable of winning at a high level," said AG2R Manager Vincent Lavenu. "He will be starting a new challenge with our AG2R Citroën Team from January 1st. I know he will be able to show all his talent when racing in our colours.”