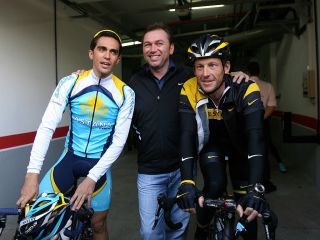 Former Astana sports director Johan Bruyneel has made a lengthy defence of his track record in the 2009 Tour de France, after a recent interview by Alberto Contador revived interest in the bitter power struggle between teammate Lance Armstrong and the young Spanish champion in the race.

Last week, Contador had argued in an interview with YouTuber Valentí Sanjuan that   - among other flash points during the 2009 Tour - he was left isolated by his team on stage 3 when there were echelons and also risked being deliberately hampered by team orders on the road to Andorra four days later.

Not only that, but Contador also had a tense series of encounters with his teammate Armstrong, was barred from bringing his trusted domestique Benjamin Noval to the race, and there were issues, too, with his team bike, which he felt lacked the equipment that was exclusively provided to the American.

Bruyneel, speaking on the podcast 'El Leñero,' has provided a very different version of events in a Tour de France that ended with Contador's second win and a third-place overall for Armstrong - although he was later stripped of his podium result for doping.

While at pains to emphasise that he had no issues with Contador and that he was "not here to attack a great champion", Bruyneel underlined that he did feel that Contador's implications that he was there to support Armstrong more than his Spanish teammate were not justified. Instead, he argued he was there to protect the team's interests globally.

Regarding the stage 3 splits where Armstrong was ahead and Contador behind, Bruyneel insisted, "There was no conspiracy between George Hincapie" - a friend of Armstrong's who, riding for High Road, helped forged the echelon where Contador lost time - "and Lance Armstrong. It was just High Road split the race and those who didn't pay attention weren't up there."

As for his strategic decision to have the Astana team work with HighRoad to keep the echelon going, "Only once, having gone through the list provided by Radio Tour and being absolutely sure that there was nobody there present who could challenge our team [on GC], I repeat, our team, did I give the order in the team car for [Yaroslav] Popovych, Haimar [Zubeldia] and Lance to collaborate. Why? Because it benefited us. Any sports director would have done the same. At no point was it an attack on Contador."

Regarding the Andorra stage, Contador claimed that Bruyneel had insisted the night before that the team take things 'slowly' on the stage when he, as a climber, wanted to attack all-out on the race's first summit finish on stage 7.

"I would never have team meetings the night before, but in any case, my instructions the following morning in the bus were that we could not take the yellow jersey that early," Bruyneel argued on El Leñero, "because once you have the jersey you can't make the other teams work. I might well have said to keep the group together because there were 14 stages left to go. But I didn't say we should go slow.

"If Alberto felt so strong and so much the leader, he should have said so in the team bus that morning. But he didn't."

Bruyneel's argument regarding his strategy and the yellow jersey, however, contrasts slightly with his tactics for the leader in most of Armstrong's Tours when the Texan - with the exception of 2003 when he was sick - invariably went all out on the first mountain stage. In Bruyneel's defence, the Andorra stage was notably early in the 2009 Tour compared to other previous editions where the mountains kicked in much later.

Another source close to Astana that year has supported Contador's claim that he was not allowed the team's top wheels for the time trials, which were reserved for Armstrong - as he has claimed, but which Bruyneel says he "could neither confirm nor deny."

"There were more than wheels for everybody in that year's Tour; 40 disc wheels for the team, not two" Bruyneel argued. "It's a delicate subject because Lance raced that year, 2009, for free, he had a personal contract with Trek and that's why he used their bikes, with their own design.

"Lance's main reason for returning to racing was to publicize his Foundation on an international level and he raced with bikes which then were auctioned and the money went to charity," Bruyneel pointed out, which indirectly explained why Armstrong's disc wheels, the lightest on the market, were bought from a German company as a result of the American's sponsor deals and had different decals.

However, a source close to the Astana team of 2009 and present on the Tour, who requested anonymity, told Cyclingnews, "The best wheels in that Tour time trial were for Lance, that was clear. There were others, for sure, but they weren't such good quality."

The same source also argued that Contador had "all but lost the race" on at least one occasion on a flat stage because he lacked sufficient team support.

Contador also insisted that his personal mechanic had his bike up with him in his hotel room before certain key stages, as a precaution something which upset Bruyneel as excessive.

"It's a mental fabrication by somebody who doesn't trust others, who sees danger in all parts, a bit paranoid. It's the most ridiculous thing to think that my team could do something against Contador's bike. Alberto isolated himself." Other sources have suggested, though, that Armstrong himself had his own mechanic take his bike up to his room as well.

Bruyneel recognised in the El Leñero interview that the two team leaders had strong characters, that the relationship between the two was never easy, to the point where in the first team training camp in the Canary Islands in January, "They didn't even talk to one another the first day, didn't even say 'hi'. But that Tour wasn't half as dramatic as the press, particularly in Spain, like to make out."

Without naming names, he also argued "three or four people who know who they are" in Contador's own closest network of collaborators, had played a large scale part in complicating matters between the Spaniard and the team.

Bruyneel added that Contador was the team's leader in the Tour de France and that he had told Armstrong in his first meeting with the Texan back in 2008 when he was starting his comeback trail that Contador would likely be the strongest in the Tour and normally would win it. To which Armstrong's response was "we'll see."

He also called Contador the best stage racer of his generation "then in the second half there were a series of circumstances that affected his career and also his paths crossed with Froome, but in my opinion, Alberto was one of the greatest stage racers in history."

Armstrong himself has refused to be drawn into the debate, saying on his Instagram account that Contador, as the 'best rider' that year, deserved to win the 2009 Tour.

Bruyneel also said in the Leñero interview that his relationship with Armstrong continued to be good, while with Contador "it was a very good professional relationship, until the Tour of that year, which he surely thought I didn't behave well towards him, but I don't share that opinion."