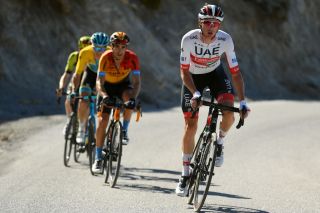 Despite cycling's shutdown since March due to the coronavirus pandemic, new UAE Team Emirates signing Brandon McNulty – who joined the WorldTour squad from US Pro Continental team Rally UHC – has already been able to score notable results at the two stage races he's completed for the squad this season. Now, with racing set to resume this summer, the 22-year-old American is keen to show what else he's capable of.

McNulty started his season at the Vuelta a San Juan in Argentina, and impressed with fifth place in the individual time trial on stage 3, and then even more so with his third place on the 'queen stage' that was stage 5, with its summit finish at Alto Colorado, resulting in fourth place overall.

He then backed that up with seventh overall at the Ruta del Sol back in Europe, where he took top-five finishes in the final three stages of the hilly five-day Spanish race.

Writing on the UAE Team Emirates website on Thursday, McNulty admitted that his start to the season had been very satisfactory, but said that he was looking forward to being able to race with his new team once more.

"During the winter, I was able to get a really solid base of training in, which allowed me to be in good form early in the year and hit the ground running," he said. "I performed well in San Juan and the Ruta, so it was really disappointing the season had to come to a pause, but understandable.

"It's exciting to be a part of a growing team and I can't wait to show what I can do when we get back to racing," McNulty said. "We've got a lot of pro racing experience as part of the management team, with [team manager] Matxin Fernandez, [team principal] Mauro Gianetti and [sports director] Neil Stephens all adding a wealth of knowledge to an already world-class roster. I'm looking forward to learning from everyone when the lockdowns get lifted and everything goes back to a sense of normality."

McNulty won the junior individual time trial at the 2016 World Championships in Doha, Qatar. He then joined Rally in 2017, and took second in the under-23 TT at that year's Worlds in Bergen, Norway. Earlier that season, he'd become the US U23 TT national champion.

In 2019 – his final season with Rally – McNulty took a solo road-race stage victory, and with it the overall classification, at the UCI 2.1-ranked Giro di Sicilia, no doubt concreting the interest shown in him by WorldTour level teams.

"I think it's fair to say that my first season on the WorldTour has been less than normal," McNulty said of the effect of the coronavirus pandemic on the 2020 racing programme.

"As a team, we're full of riders from all over the world, meaning we've all been quarantining in different countries," he said. "I was lucky to have been able to get back to the US before things started to get really bad, so I'm at home with my family and girlfriend at the moment in Phoenix, Arizona."

Unlike some of his colleagues in countries like France and Italy, which were in full lockdown before rules were relaxed somewhat last month, McNulty has been able to train outside all along, and doesn't feel as though his life has been overly impacted.

"With so much uncertainty surrounding the race schedule, I've been trying to have fun, and have also been on the mountain bike a lot to keep up my fitness levels," McNulty said. "My coach, Inigo San Milan, has been great. He mainly advised me to just enjoy being able to ride outside and not worry too much about a structured training schedule.

"My family and I have stayed healthy and remained positive about the whole situation," he added, "and as long as we have our health, I'm grateful."