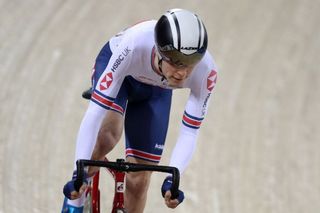 Britain's Fred Wright has signed a contract with WorldTour team Bahrain-Merida for 2020, which means that he'll be riding alongside compatriot Mark Cavendish next season.

Wright signs on as stagiaire at CCC Team

The team announced the signing of Wright at the same time as 20-year-old Colombian climber and fellow neo-pro Santiago Buitrago Sanchez, with both riders joining on two-year contracts.

"We're thrilled these young riders have joined the team and are now part of its future direction with Rod Ellingworth and McLaren," said the team's operations director Brent Copeland in a press release.

"They'll play an instrumental role in shaping the team's future, and we look forward to providing them with the right environment to thrive," he said.

Wright rode the second half of the 2019 season as a stagiaire with Polish WorldTour outfit CCC Team. He's been a successful part of British Cycling's track endurance squad in recent years, and won the under-23 European Madison title on the track with Matt Walls in July, as well as being a former European junior champion in the team pursuit and the omnium.

On the road this year, 20-year-old Wright won a stage at the 'Baby Giro' – the 10-day Giro Ciclistico d'Italia stage race – and also finished 11th the following month at the Tokyo 2020 road race test event.

"Finally I can announce that as of next year I'll be racing for Bahrain-Merida," Wright wrote on Twitter on Wednesday. "Super excited for my first two years in the pro peloton. Bring on the next step."

Buitrago, meanwhile, impressed the team with his climbing skills at both July's Giro della Valle d'Aosta, where the 20-year-old finished sixth overall, and his victory the following month at the Trofeo Comune di Lamporecchio one-day race, while riding for Team Cinelli.

Finally I can announce that as of next year I'll be racing for @bahrain_merida super excited for my first two years in the pro peleton. Bring on the next step✌ https://t.co/u07uDBHhSNNovember 13, 2019