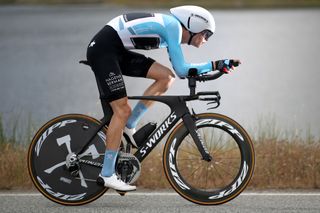 Ian Garrison – pictured racing for Hagens Berman Axeon at the 2018 Tour of California – made the step up to Belgian WorldTour squad Deceuninck-QuickStep for 2020 (Image credit: Getty Images Sport)

Hagens Berman Axeon team manager Axel Merckx has admitted his frustration at the lack of clarity over which under-23 races are still likely to happen this season with the main focus having been put on trying to ensure that the sport's marquee events – the likes of the Tour de France and the big one-day Classics – take place following the shutdown of professional racing due to the coronavirus pandemic.

Merckx is the long-time manager of the US-based UCI Continental-level team, made up exclusively of under-23 riders. His team serves as a proving ground for a number of up-and-coming young riders, many of whom are Americans, who get the opportunity to ride at European races under Merckx. Graduates from the 2019 Hagens Berman Axeon squad to WorldTour teams for 2020 include American Ian Garrison and Portuguese rider João Almeida, both of whom moved to Deceuninck-QuickStep, and Denmark's Mikkel Bjerg, who's joined UAE Team Emirates.

"It is very frustrating," Merckx told Sporza on Wednesday. "Everyone's ready to make something of it – to keep the U23 riders going for a few races – but there are still so many question marks.

"I've been in contact with race organisers who don't know what's happening themselves. I have riders who almost all come from America. When can we come [to Europe]? Where can they ride?" he asked.

Coronavirus: Aevolo will expand to U24 team for 2021 season

However, Merckx also believes that despite his, and other, U23 riders having missed a large chunk of the 2020 season – therefore missing a number of opportunities to show off their capabilities to WorldTour teams – interested parties should already have seen glimpses of what they're looking for in such riders in previous seasons.

"If the WorldTour teams have done their homework well, they already know more or less who is good and who fits the team," he said. "The U23 riders have had four years to show themselves [since coming up from the junior ranks]."

And while there have been suggestions that age categories could be 'extended' by a year due to the coronavirus pandemic – and US U23 team Aevolo will become an 'under-24' team for 2021 to "give the 22-year-old riders some relief, mentally", sports director Michael Creed said in late March – Merckx is in fact against the idea.

"You have to draw a line somewhere, and 23 is already quite old," he said. "If you're going to move that line now, how do you move it back? I hope we have a few more months [of racing this season] so that the young riders can get some results. Then we can keep things as they are."

In related news, French newspaper Le Dauphiné Libéré reported this week that the Tour de Savoie Mont-Blanc and the Tour de 'Avenir – two major stage races that are proving grounds for young riders, both of which have been won in the past by 2019 Tour de France champion Egan Bernal (Team Ineos) – will take place from August 5-8 and August 18-23, respectively.