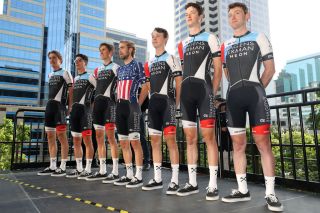 Axel Merckx's Hagens Berman Axeon development team have finalised their 2020 roster with the addition of James Fouché from New Zealand.

“I have known about Hagens Berman Axeon for as long as I have been riding,” Fouché said in a statement released by the team. “There have been many Kiwis go through the program and onto the big stage, which I am hoping to do myself and believe it can be done with the help of the great staff that surrounds the team. It’s an awesome and exciting time ahead.”

Fouché, who rode for Team Wiggins in 2018 and 2019 and was a stagiaire with Mitchelton-Scott at the end of last season, placed fifth overall at A Travers les Hauts de France, fifth at Classica da Arrabida, and sixth at Gent Wevelgem Kattekoers. But has been most impressed with his climbing ability. Fouché won the King of the Mountains classification at not just one 2.2 classified race, but three [Tour of Antalya, Volta ao Alentejo, and Le Triptyque des Monts et Châteaux (2.2U)].

Despite his climbing prowess, Fouché believes the hard Classics like Paris-Roubaix, Gent Wevelgem, and Tour of Flanders suit him well, saying he has learned to “read” races well and can get into breakaways when given the opportunity. In 2020 he's hoping to improve on his acceleration and his ability to finish off races.

“I think this would help me get a few results from a small group at the end of a hard day,” he said.

Fouché is the fifth and final rider to join the 2020 Axeon roster after the U23 team signed Jens Reynders, Jarrad Drizners, Michael Garrison and Pedro Andrade.