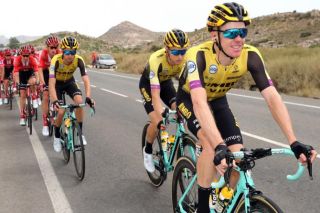 Jumbo-Visma’s Tour de France build-up took another blow this week, with confirmation that Steven Kruijswijk would be forced to skip Paris-Nice in March.

The Dutch rider, who finished third at last year’s Tour de France, was due to make his 2020 debut at the French one-week race alongside Primoz Roglic. Less than 24 hours after the team told Cyclingnews that Kruijswijk was at '100 per cent', however, news broke that the 32-year-old would not race until the Volta a Catalunya in late March.

Kruijswijk’s 2020 preparation already took a knock when he was forced to ease off training in January due to a knee injury, but the latest setback comes after teammate Tom Dumoulin was forced to postpone the start of his season for a second time.

Dumoulin skipped the Volta a la Comunitat Valenciana due to illness earlier this month and was then pulled from the Jumbo-Visma roster for March’s Tirreno-Adriatico due to ongoing health issues.

The former Giro d’Italia winner is set to undergo further health tests in the coming days but his team have already ruled out Epstein-Barr – the virus that Mark Cavendish and several other riders have contracted in recent years.

With Dumoulin and Kruijswijk on the sidelines, Jumbo-Visma are left with just one fit and ready-to-race Tour de France leader, Roglic. The Slovenian is currently training in Tenerife and is due to start his campaign in Paris-Nice, where he will be the sole leader for the Dutch squad.

Kruijswijk travelled to Tenerife with Roglic and, according to a Jumbo-Visma spokesperson, "he had some troubles with his knee at the beginning of January. That’s why he skipped the Alicante camp last month. As a result, his season’s debut is a bit delayed as well. The initial plan was to start in Paris-Nice but we prefer to delay his start a bit."

Assuming that Kruijswijk starts his season in Catalunya and Dumoulin begins in the Basque Country on April 6, the pair will have already missed 20 days of racing between them. However, on Thursday team director Merijn Zeeman told Cyclingnews that he had no concerns over the team’s plans for the Tour de France and that, at present, there is still plenty of time for all three of Jumbo-Visma’s leaders to arrive in Nice for the Grand Départ fit and healthy.

In a direct response over questions relating to Dumoulin’s health, Zeeman told Cyclingnews: "Of course, if in a month we’re at the same stage then I’ll talk differently but at this moment he had a good winter, and he had three months of training under his belt.

"Right now, he’s missing but I believe that we can get him back on track and that there’s no reason to worry about the Tour. I believe he can still be on a very high level in July. There’s no panic. That’s never the right way of doing things. We need to think straight, talk straight and do the right things."