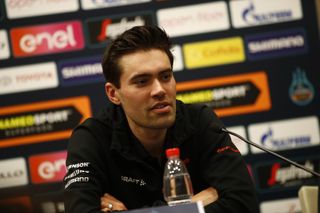 Jumbo-Visma are refusing to panic about the health of Tom Dumoulin despite the news that the Dutchman has been forced to push back his season debut once more due to health reasons.

Dumoulin was scheduled to start his campaign at the Volta a la Comunitat Valenciana earlier this month but despite travelling to the race with his team, the 2017 Giro d’Italia winner failed to start the first stage due to illness.

An altitude training camp and a fresh start at Tirreno-Adriatico in early March were penciled in but both events have now been wiped from the slate after Dumoulin announced that he was not yet healthy enough to compete due to recent stomach problems.

A new plan has been put in place for April, but Jumbo-Visma are still none the wise when it comes to diagnosing Dumoulin’s health problems. They have been able to rule out Epstein Barr virus and hope that further tests this weekend will shed more light on the 29-year-old’s condition.

“He has some intestinal problems but it’s also correct to say that he has low energy and he’s tired,” Jumbo-Visma directeur sportif Merijn Zeeman told Cyclingnews on Thursday morning.

“It’s a combination of a lot of things, and it means that he’s not 100 per cent fit. It’s not that he can’t go to an office but he’s not currently fit enough to be a high-performance athlete. That’s the condition that you need to train and prepare well. We need to find out the exact problem with him.

"We’ve already tested for Epstein-Barr, and it’s not the case. He was tested just after Valencia with several tests for that sort of thing. At the moment I don’t know what the issue is. The medical staff has checked a lot of things but it’s not the sort of thing that’s easy to find. Before Valencia, on Monday, he was really sick, like normal sick, and then in the days after it was like as I described, with low energy and feeling tired. There is a wide variation of things for us to check and hopefully next week, after more tests, we can communicate what the problem is. We don’t know what it is yet.”

Jumbo-Visma made the unprecedented decision of announcing their Tour de France line up back in December, with Dumoulin set to lead the line with Primoz Roglic and Steven Kruijswijk. The latter is returning to fitness after a spell on the treatment table due to a knee injury, but the team are confident that all three leaders will be in peak condition come the summer.

However, Dumoulin’s position is slightly more precarious given that he has not raced since last year’s Critérium du Dauphiné and the second half of 2019 was wrecked by the knee tendon injury he suffered on stage 4 of the Giro d'Italia.

Despite the series of setbacks, Zeeman believes that there is just enough time to get the Dutchman firing on all cylinders.

“Of course, if in a month we’re at the same stage then I’ll talk differently but at this moment he had a good winter, and he had three months of training under his belt," Zeeman said.

"Right now he’s missing but I believe that we can get him back on track and that there’s no reason to worry about the Tour. I believe he can still be on a very high level in July. There’s no panic. That’s never the right way of doing things. We need to think straight, talk straight and do the right things."

“Of course it’s a big blow for him to miss Valencia. It’s a huge disappointment, obviously, especially because of all the background, how he changed teams, and all the races he missed in 2019. Of course, it means that this has more impact than it would on another rider but still we have full confidence in the staff and experts that we have. We can get him back on track.”

Meanwhile, Roglic and Kruijswijk will head to Jumbo-Visma's next training camp as they prepare for their season debut at Paris-Nice.

“Primoz is going well. We’re happy with his progression and he goes to altitude tomorrow with Steve, who is also 100 per cent fit again. We’re building towards Paris-Nice with them and we believe we’ll be there to fight for the win."